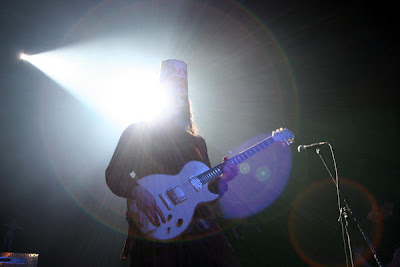 Guns N' Roses will not be performing as scheduled at Rock In Rio - Lisbon.

The band has been put in an untenable position by guitarist Buckethead and his untimely departure. During his tenure with the band Buckethead has been inconsistent and erratic in both his behavior and commitment - despite being under contract - creating uncertainty and confusion and making it virtually impossible to move forward with recording, rehearsals and live plans with confidence. His transient lifestyle has made it impossible for even his closest friends to have nearly any form of communication with him whatsoever. Last time I talked to Bucket, he called to tell me he had bought a bootleg DVD off EBay and how proud he was to be in Guns and how impressed he was with everyone's performance. Then, in February we got word from Brain that Bucket had called him and said he was back in Guns!? Apparently, according to Bucket he had been "Gone" but had turned himself around and was really excited to do Rio-Lisbon and a European tour. Somewhere in the following month things changed once again. According to those who have actually spoken with Buckethead it appears his plans were to secure a recording contract with Sanctuary Records which I encouraged my management to make available to him, quit GN'R and to use his involvement in the upcoming Guns release to immediately promote his individual efforts...Nice guy!

There is not a member of this camp that is not hurt, upset and ultimately disappointed by this event, and more to the point - if not this individual, certainly this individual's choices. Regardless of anyone's opinions of me and what I may or may not deserve, clearly the fans, individuals in this band, management, crew and our support group do not deserve this type of treatment. We as a whole, definitely feel that we afforded Bucket every accommodation perhaps so much so that it may be that we or more precisely, I may have done Guns a disservice and unintentionally allowed Guns to be put in this position.

On behalf of Guns N' Roses and myself I apologize to the fans who planned to see us at Rock In Rio - Lisbon. The festival and its tradition mean a lot to me personally and I sincerely do not enjoy being robbed by one of our own of the opportunity to be the first artist to play it for the third time. I would also like to express my gratitude to those who chose to embrace Buckethead's role in Guns and support our new line up. We greatly appreciate Bucket's contributions and remain open to "discussions" as there are obviously several issues to resolve. In the meantime rather than dwelling on the negative, Guns will be moving forward and surprisingly (without giving away any details) this unfortunate set of circumstances may have given us the opportunity to take our recording that one extra step further. Regardless we hope to announce a release date within the next few months.