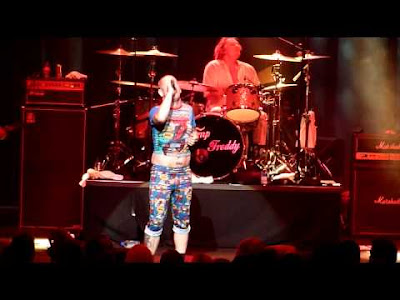 In his latest Twitter posting (Monday, Jan 10), Velvet Revolver drummer Matt Sorum says the band just completed a four-day writing and recording session "with an amazing singer," which led to "nine killer demo tracks." He also said that VR is "going to make the decision one way or another this week."

Matt talked to Noisecreep about how the audition process was going:

"We tried out a lot of new guys, and basically it's quite a process. Scott Weiland is one of the best frontmen out there. And I've been in bands with Axl Rose and Ian Astbury. Those are big shoes to fill. So we're looking for a tried and true individual that can mesh with guys like us that have been out there doing this for a long time.

It hasn't been an easy task, and that's why it's taking a long time. But we don't want to come out half-cocked. We want to create something that people are gonna go, "Wow, that's awesome." We've had a couple situations where we've been with some singers, and we've pulled out of because we didn't feel completely secure in the fact that going forward the guy was the right move.

We tried out some fairly unknown guys and some guys that have been out there a little bit. But the guy we're really excited about know is a pretty known guy. I don't want to say anything yet because we're still in the dating phase. We haven't consummated the relationship or made a gentleman's agreement. So I can't let the cat out of the bag until there's an official stamp of approval on the deal."

Regarding the new singer, guitarist Slash told ARTISTdirect.com "we're gonna have a whole different personality as a vocalist. It's gonna be a lot heavier than anything Velvet Revolver has done so far. 'Cause that was the only thing missing for me — the sort or heaviness of it — in the first two Velvet Revolver records."

Sorum said, "the guy we're liking right now is a known guy. He's a guy we've had our eye on, but the timing wasn't right. He's a little younger, a little stronger, a bit heavier rock 'n' roll than we are, that's all I can say.

Writing is a lot of the way we've been trying out singers, and a lot of the reason we've had trouble trying to pick a guy, because we really need to hear that truth.

We can't just jump out there with any singer. We've got to make the right decision ... a guy who can front a rock band of this caliber and be a strong enough frontman to go out in front of Slash and be that guy.

We need to hear that vocal, that lyric, that melody. It's not an easy thing."

Sorum said the band was impressed that the frontman candidate "has a work ethic similar to ours" and also brings a "modern" edge to the group.

"I've always stressed to the band that we need to be current. I don't want to go out there and make retro-Rock 'n' Roll music. We have to take in the environment and parlay that into a Rock 'n' Roll outlet."

Last month, Matt told Bravewords.com that if something doesn’t happen in 2011 with Velvet Revolver, it might be the end of the group. He was asked if fans could expect an album or a tour from Velvet Revolver next year.

“I would like to say ‘yes’ as a guarantee and the only reason I’m saying that is because if it doesn't happen by 2011 we're definitely going to pack it up.

But it will happen - because that’s our goal.

We’ve known each other for over 20 years and it’s like a gentlemen’s agreement. It’s like ‘OK, let’s do this’.”