Dizzy Reed: "A Lot of People are Waiting for My Record" 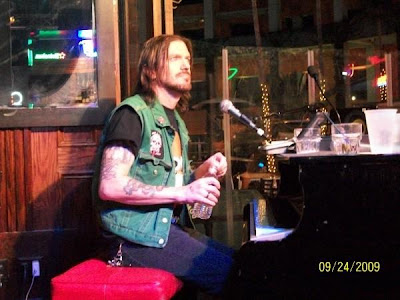 Dalton Daily Citizen
Dizzy Reed is coming to Georgia this Saturday. Best known for his tenure as the keyboardist for Guns N' Roses, with whom he has played, toured, and recorded since 1990, Dizzy will be at Wild Bill's in Atlanta playing all your favorite Guns N' Roses tunes, along with some new stuff from his upcoming CD, titled Rock N Roll Ain’t Easy.

Apart from Axl Rose, Dizzy is the longest standing member of GN'R. Because GN'R's Appetite for Destruction is my all-time-favorite-Get-Motivated-CD, I was beside myself when the opportunity to chat with Dizzy presented itself last week.

Here’s how that went:

"Why do they call you Dizzy?" I wanted to know.

"That’s my name," he answered. "My real name is Dizwald."

"Really?" I asked, hoping disappointment wasn't evident in my voice. I mean, come on, what kind of rock star name is Dizwald?

"No," he chuckled. "My parents weren't that cool. It’s a long sort-of thing I grew into. When I was with my former band, The Wild, I used to go by "DZ" and just to mess with me they used to call me Dizzy. I started answering to it just to keep them from messing with me. As it turns out, it's probably the most appropriate nickname for me."

It is well known that musicians, especially when on the road, get a kick out of playing practical jokes on each other. I asked Dizzy if he was prone to prank.

"I've always just, after the show, gone back to my hotel to read a book and go to sleep," he answered angelically. "It keeps me out of trouble."

"Of course not," he replied. "But I usually put my energy elsewhere. We play a lot of Poker and race Hot Wheels on the road."

Dizzy explained that Tommy Stinson, GN'R's bassist, brought Hot Wheels cars on the tour bus once. With the hours and hours the guys had to entertain themselves, they put the cars down at one end of the bus. When the driver shifted gears, or went around a curve, the cars would move a little. Victory went to the first car to reach the finish line.

"Sometimes the cars won't move for 30 minutes," he said. "It's like a horse race. You put a little money down ... the issue comes when some of the guys are in their bunks, trying to sleep, and you’re yelling for your car to win."

The key, Dizzy explained, is finding a good car. When he was on tour in Paris, France, he went to the Ferrari dealership and bought some official Ferrari Hot Wheels.

"Those things are bad ass," he relayed. "They weren’t cheap."

"I heard you were in the recording studio yesterday," I told him. "What’s going on? Can we expect a follow-up to Chinese Democracy any time soon?"

"Most days off I’m in one studio or another," Dizzy shared. "But no, GN'R is taking some time off right now. Yesterday I was working on a concept album, still in its infantile stage, nothing worth talking about yet."

As far as a follow-up to Chinese Democracy, GN'R's last album, released in 2008, goes, Dizzy is hopeful.

"You knew Axl Rose and the original line-up of GN'R before they became huge," I said. "Did you, at that time, have any idea you’d someday join them?"

"The first time I saw them I said to myself, 'this band is going to be huge,'" Dizzy shared. "They had all the great elements on stage. They were doing something that seemed important. They had the right songs, a great frontman, and character. I wanted to be in that band."

In the 80s GN'R practiced in a warehouse next to where Dizzy's band, The Wild, practiced. That's how he first met the original Guns.

"Axl had a plan in place," Dizzy said. "He wanted to add a keyboard and when he met me he decided I would be that guy. People sit around, drinking beers, and everybody's got ideas and plans. Ninety-nine percent of those plans never happen. I was hoping Axl's would, but I wasn’t counting on it. They’d come back to town, I'd run into them, and they'd say 'We're going to need you soon.'"

Then one day they called.

"It didn't hit me until I read something in LA Weekly that said "Izzy, Dizzy, and Slash in the same band," Dizzy recalled. "Well, that didn't last long!"

"What has kept you with Guns this long?" I asked.

"I believe in what we’re doing," he answered. "At the end of the day my loyalty is with Axl and GN'R. When someone has left, we've brought in someone just as good or better. The lineup we have now is the best we've ever had. In the studio there's a lot of energy. There’s no reason to leave. Guns is still my number one priority."

Dizzy will be bringing his own band, DFR, with him to Atlanta on Saturday. In addition to GN'R hits, they will perform songs from Dizzy's forthcoming CD, Rock n' Roll Ain’t Easy.

"We’ve been playing these songs around the world," Dizzy said. "A lot of people are waiting for my record. These things take time, sometimes a couple of years, sometimes 16 years."

I laughed at Dizzy's good-natured reference to the 16-year time span between GN'R's "The Spaghetti Incident?" and the long-awaited release of Chinese Democracy.

Dizzy expects Rock n' Roll Ain’t Easy to come out this summer. On it he plays with a variety of musicians, including Richard Fortus and Ron "Bumblefoot" Thal (both of GN'R), Mike Duda and Mike Dupke (W.A.S.P), Frankie Banali (Quiet Riot), Ricky Warwick (Thin Lizzy), Todd Youth, and a host of others.

"All self-respecting rockers have tattoos," I declared. "What kind of ink do you have?"

"I've got a few different things," he said. "I have a lot of naked girls, beer bottles, the moon, stars, dragons, different animals ... I have a buffalo, in homage to my hometown of Bolder, Colorado. All of my stuff kind-of means something to me."

My 13 year-old son, Adam Scott, is in love with his electric guitar. I asked Dizzy what advice he could offer my own budding rock star.

"It’s practice, practice, practice, practice, and more practice," Dizzy said. "And school. When you're 13, you don't see how important school is, but you find out later. At the end of the day, Rock n' Roll is a dream but if you decide you want to do it, it's still a job. For anybody who has had success, they have worked really, really hard. It’s the people who work the hardest who go the furthest."

Finally, I asked Dizzy what the future holds for Dizzy Reed.

"Well, I bought a lottery ticket so I'm hoping ..." he laughed. "No, I've been very, very fortunate in my life to have been given a talent and to be able to use it. I'm just hoping to be doing this as long as I can and that people will still enjoy it and want to come out and be a part of it. I want to keep Rock n' Roll alive. If I can keep young bands alive, that's what it's all about."

You can keep up with Dizzy's comings and goings online at dizzyreedmusic on Facebook and at dizwaldmusic on MySpace.

On Saturday, Dizzy and DFR will headline for the up-and-coming band, Years of Sorrow, and Years of Sorrow's CD release party. Wild Bill's is located at 2075 Market Street, in Duluth. For more information, call (678) 473-1000. Tickets can be purchased online at Etix.com.
posted 11:45 AM

Dizzy's comment about replacing members with as good or better talent is either ignorant or an exaggeration.

"A Lot of People are Waiting for My Record""


I DONT THINK SO! maybe his family is...maybe. dont be be mean is just he isnt Slash or Izzy.