What Could Have Been: Zakk Wylde Talks Guns N’ Roses 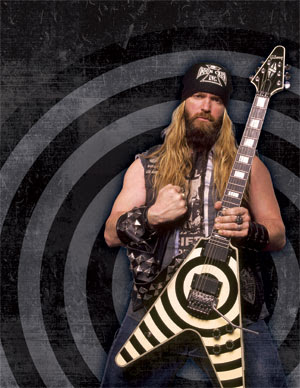 Gibson
It could have been one of the most interesting heavy music collaborations in rock history: Zakk Wylde as a member of Guns N’ Roses.

And beyond that, it would have been a Les Paul-toting guitar dream team. And it very nearly happened in the mid-1990s. The rhythm guitar slot in Guns N’ Roses was in a state of flux after the departure of Izzy Stradlin, the tenure of Gilby Clark and the is-he-or-isn’t-he-a-band-member status of Axl Rose’s friend and former Hollywood Rose bandmate Paul Huge. Meanwhile, Zakk Wylde’s role as Ozzy Osbourne’s right hand man had officially come to an end when Ozzy’s No More Tours tour wrapped up in 1992 and the Ozzman entered a short-lived retirement.

Zakk released one album with his Southern rock-influenced band Pride & Glory before returning to Osbourne’s employ for the recording of the album Ozzmosis. But by the time Ozzy’s Retirement Sucks tour for Ozzmosis rolled around, Joe Holmes was in the lead guitar chair and Zakk was on the path that would eventually lead to the formation of Black Label Society.

So what would a Zakk/Slash guitar duo sound like in the context of Guns N’ Roses?

“It sounded like the riffs I write and the way I write, mixed in with the way the guys write, you know what I mean,” Wylde says. “It would have been like, when I was jamming with Slash and all the guys, even if I’m in the band there’s only one guy that’s playing the solos to ‘November Rain,’ ‘Sweet Child o’ Mine’ and all those classic songs. I’m not going to do anything there. But the future stuff that we would have been writing, it would have been cool! Because I love Slash’s playing and I’m buddies with him. It would have been cool, but with those guys there was nothing happening, so we were jamming but it wasn’t going anywhere.”

Slash ultimately left the band in 1996 to pursue his own path with Slash’s Snakepit (using songs he was working on for the next GN’R release), while Duff McKagan and Matt Sorum’s respective tenures in the band ended a few months apart from each other in 1997. The 2001 rebirth of Guns with players such as Buckethead and Robin Finck was still a few years off, but Wylde didn’t sit around waiting for another call from GN’R. And Ozzy moved on, too.

“That’s when Oz got Joe Holmes in the band, and I didn’t have anything going on,” Wylde says. “I just had all these songs lying around and I said ‘Y’know what? I’m just gonna start doing it. And that’s when Black Label was born. I decided to just do it myself.”

This story came full-circle in December 2011 when Black Label Society joined Guns N’ Roses on tour, and Zakk joined the band on stage at several shows to blast out an AC/DC cover.

“It was awesome, man,” Wylde says. “The first time we were there, Axl was like, ‘Dude, you wanna get up and jam? Look at the setlist, pick out the songs, whatever.’ I said ‘Whole Lotta Rosie’ is pretty easy. Pretty much everyone all learns that one. So this way there didn’t have to be any band rehearsals, me sitting in with the band, you know. The GN’R songs are all already worked out, so I said why don’t I just get up there and jam out on ‘Whole Lotta Rosie’? And it was great, man. All the guys in the band are super-cool dudes, and I’ve known a bunch of them for a bunch of years. It was great seeing Axl again because I haven’t seen him since like 1995 when I was jamming with them. And he’s doing great. We had a couple of laughs talking about the same old ridiculous stuff about the music business, y’know. Music in general and just life in general. It was good catching up, and it was a blast playing on stage. And the crew guys were all super-cool dudes, so it was a good time, man.”

Incidentally, Paul Huge (also known as Paul Tobias) eventually did go on to become a member of Guns N’ Roses for several years, playing on the band’s cover of The Rolling Stones’ “Sympathy for the Devil” on the Interview with the Vampire film soundtrack, co-writing “Oh My God” for the soundtrack to the film End of Days and playing live with the band in 2001. And Joe Holmes, a former student of Randy Rhoads, went on to serve as one of Ozzy’s longer-running guitarists, playing with the Ozzman for two stints: from 1995 to 1998, and again from 1999 to 2001.
posted 5:45 AM