Duff "Can't Give Any Sort of Timeline at All" 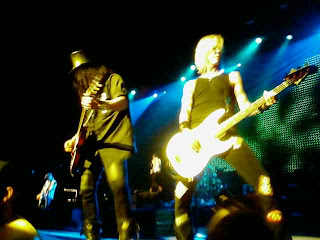 "We will find a singer at some point," he predicts. "We just have to find the guy. There's bee a couple guys I thought were perfect, but everybody's got to be 100 percent into it. We have an albums worth of material -- great, big, huge songs. Zepplinesque. Once we find the guy that can complement those and take it to another level, that'll take off. But I can't give any sort of timeline at all."

Talking to ContactMusic.com about sacked singer Scott Weiland, Duff said that he and his Velvet Revolver bandmates kicked the frontman out of the group when it became clear Weiland couldn't stay away from drink and drugs.

"There is a part of him that I became friends with. He's a really good guy and funny. I know that guy is there somewhere. It just got lost again. We tried to pull Scott back, but we couldn't. When he's into that other side, it's not cool. It's not friendly. You try to help, but then after a while you realise you can't."

Duff's other band, Loaded, kicks off their 3 month world tour in their home city of Seattle tonight at The Crocodile.

Related: A Message From Slash