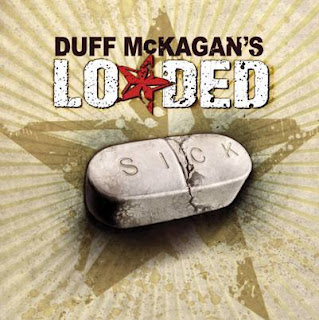 Sick, the new album from Duff's side band, Loaded, sold 1,400 copies in the US its first week of release, according to Nielsen SoundScan.

Sick landed at number 43 on the Top New Artist Albums (Heatseekers) chart, which lists the best-selling albums by new and developing artists, defined as those who have never appeared in the Top 100 of The Billboard 200.

Asked about the status of Velvet Revolver, McKagan told Reuters, "It is not done. We just haven't found a singer ... There’s a lot of criteria to fill."

McKagan rebuffed a suggestion that he could take over as lead vocalist. He sang harmonies with both Velvet Revolver and Guns N' Roses, and often took a solo spot during Guns N' Roses shows singing the old punk song "Attitude."

"I'm very comfortable singing, for sure. I know what my range is," he said. "(But) we need a standalone singer, for sure. We need that rock guy."

As for his colleague Slash, Duff revealed that the guitarist is recording a solo project with guest vocalists, including Black Eyed Peas frontwoman Fergie.

McKagan rolled his eyes at the mention of the pop singer’s name, but said he "completely" supported Slash’s creative decisions.

Video footage of Loaded performing the song "Wasted Heart" on April 9, 2009 at the Crocodile in Seattle, Washington can be viewed below.