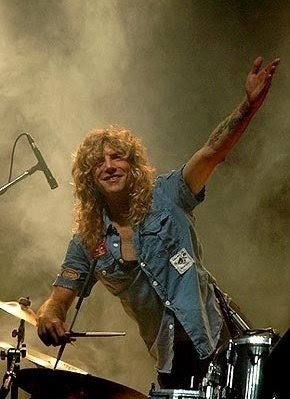 Interview with Steven Adler (METALKRANT)
Hello Steven, how are you doing?

I am doing great! Looking forward to this new year! I have a lot of things I wanna do!

At moment you are on the road in the US, is there any chance you will visit Holland or Europe soon?

We just finished the second successful US tour of 2009. It was a great run. Our agent, ARM, is finalizing the details of the European tour. We are looking forward touring all of Europe. It looks like we will start in mid March, 2010, but believe me, my bags are already packed and I am ready to go! Holland will definitely be a stop and hello to everyone at the Bulldog Coffee House!

Adler's Appetite made some line-up changes through the years, are you satisfied with the current line-up

This is definitely the best line-up so far. I am happy to have such great players in my band. I am also talking to Mili of Steelheart about possibly doing some of the European dates with us. We will have to see how that unfolds.

Are you still recording new songs for maybe a new album?

Yes. We are working on several songs in the studio. It is our goal to have an album out later in the year. The first songs we have done kick ass!

Recently you did a performance with Slash and Duff at the LAYN Benefit. How was it to be onstage again with these guys after all these years?

I have not felt so comfortable in over 20 years. It was surreal. Like we have never stopped playing together. Like no time had passed and we had never been apart. Those guys are family.

You also recorded a song with Slash for his upcoming solo album, are you satisfied with the result and what kind of song can we expect?

It was with Slash, Flea and a singer that you all know. I will let Slash announce who it is. It is a great Rock N' Roll song. It was good for us three to be playing together. Slash, Flea and I grew up in the same three block area. It was amazing to get together.

Last year you were on Celebrity Rehab, has being on TV opened up new things for you?

Yes! I did a movie after that it is called Dahmer vs Gacey. Yes, it is about the two serial killers. It was really a fun project to be a part of.

I hear that you have an instructional drum DVD coming out?

Yes, I am really excited. It's called Steven Adler's Getting Started With Rock Drumming. It is the basics for beginners to start playing. I have so many fans from different age groups that always ask questions about starting out and advice. This DVD is to get everyone started on a life of drums! It is available everywhere. You can buy autographed copies through my MySpace or Facebook.

Thanks for the interview, any last words to our readers?

I want to thank my fans for the support! I appreciate all of you! Please go to my MySpace and Facebook profiles and add me. I post all the current things going on in my life and most importantly, we post the dates of upcoming shows. I don't want anyone to miss the shows!