Soundgarden Is Getting Back Together, But Don't Expect Guns N' Roses, The Smiths Or *NSYNC 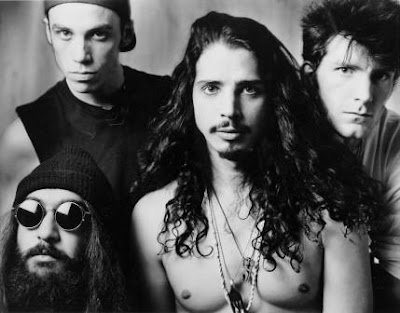 MTV
On New Year's Day, Soundgarden put aside a decade-plus of acrimony (and Audioslave) and announced that they were re-uniting, for … well, they didn't exactly say why they were doing it, but we'll assume it had something to do with the promise of plum festival headlining slots, sold-out arena shows and, of course, boatloads of cash. Because, really, we can't see any other reason why they'd get back together.

Make no mistake about it: Though Soundgarden's 1997 split lacked the fireworks with which most mega-successful, multi-platinum rock acts tend to implode, it was by no means a friendly thing. Worn out by years on the road and weakened by the internal struggle between frontman Chris Cornell and guitarist Kim Thayil, Soundgarden played their final gig on February 9 in Honolulu, Hawaii, walked off stage and simply disbanded. Since then, nearly every member has said repeatedly that a reunion would never happen, and the rift between Cornell and Thayil appeared to widen with each passing year, becoming a certifiably gaping chasm last year, when three-quarters of the band (Thayil, bassist Ben Shepherd and drummer Matt Cameron) appeared on stage together to perform a handful of Soundgarden songs … with burly man-mountain Tad Doyle singing lead.

The message to Cornell was clear: You can have your Audioslaves and Timbaland-produced solo albums and we'll take the Soundgarden stuff. And it seemed to be proof-positive that a Soundgarden reunion would never, ever happen. But somehow — perhaps aided by an impromptu Temple of the Dog reunion at a Pearl Jam show late last year — both sides managed to find some common ground. And now, Soundgarden is back, and apparently, everyone is on board.

And while, yeah, we're pumped for the reunion, we're also left a bit disillusioned by it. It means there's now one less band in the "Never Again" club, that exclusive collection of legendary groups that will never — under no circumstances whatsoever — reunite. For years, we had believed that Soundgarden would never get back together. It was part of their legacy, right up there with the less-than-satisfying final album (1996's Down on the Upside) and the time we all realized that Cornell wasn't going to grow his hair long again. There was a rather perfect imperfection to their final days, something strangely fitting about they way they simply petered out. They were a band that rode the wave, made it huge, then called it quits. It was cyclical. It was part of life.

Quite simply, we need more of that. In a world of now now now, it's somehow perversely satisfying that there are some groups who are seemingly content just to let us wait forever. And with each passing year, as bank accounts dwindle and festival lineups expand, the list of "Never Again" bands continues to dwindle. So, in celebration of those unmoved by lucrative deals and nostalgic slurping, we've decided to compile a list of those acts. Here are five groups you'll never, ever see reuniting. You know, probably.

The Smiths
The much-celebrated Manchester mopers split in 1987 amid dissension between Morrissey and guitarist Johnny Marr, and have spent much of the past three decades turning down offers to reform. There have been lawsuits — in 1996, drummer Mike Joyce and bassist Andy Rourke contended they were owed royalties — and each member has since gone to pursue musical endeavors of their own (Morrissey continues to record solo albums, Marr joined Modest Mouse and the Cribs), but the one thing they seemingly all can agree on is that the Smiths are gone forever, with Morrissey famously opining that he'd rather "eat [his] own testicles" than reform the band. The offers will continue to pour in, but we're willing to bet that the Smiths will remain on the sidelines, graciously, swooningly so.

ABBA
Perhaps the gold-standard of permanence, ABBA unofficially split at the end of 1982, and, in the decades since, have made no bones about the fact that they never plan to perform together again. Sure, they've made plenty of appearances together, but aside from a 1986 song they recorded as a birthday gift to their manager, they've never attempted to follow up their final album, 1981's The Visitors. The group remain close friends, and the songwriting tandem of Bjorn Ulvaeus and Benny Andersson went on to become one of the most successful in history (perhaps you've heard of "Mamma Mia!"). ABBA's legacy as one of the most popular acts on the planet is secure, and they all seem perfectly fine with just letting it be.

Talking Heads
Perhaps owing more to David Byrne's lack of desire to continue the group, the Talking Heads released their final album in 1988, then didn't get around to announcing they had split until 1991. In '96, the remaining three members of the group — Jerry Harrison, Tina Weymouth and Chris Frantz — recorded an album under the guise of "The Heads" (with a variety of artists — including Blondie's Debbie Harry, INXS' Michael Hutchence and Ed Kowalczyk of Live — filling Byrne's shoes). Through it all, Byrne has continued a genre-busting solo career, Harrison has become a producer of note, and Weymouth and Frantz still make music as the Tom Tom Club. The full band reunited for their 2002 induction into the Rock and Roll Hall of Fame, but that appears very much to haven been a one-time thing.

Guns N' Roses
This one has less to do with principals and permanence as it does reality. By "Guns N' Roses," we mean, of course, the real Axl/Slash/Duff/Izzy/Dizzy/Sorum version of the band, not the one that finally got around to releasing Chinese Democracy in 2008. (Also known as "The version with the goofy guitar players.") Unfortunately, there's been so much water under the bridge since — and so much bad-blood spilled between members, particularly Axl and Slash — that we're willing to believe it'll never, ever happen.

*NSYNC
Don't laugh. As one of the most-successful acts of the past decade, a reunited *NSYNC could command a king's ransom, but, since going on "indefinite hiatus" in 2002, they've recorded no music, and have made no bones about the fact that the group is officially over. Of course, this may have more to do with the fact that Justin Timberlake has since become one of the most famous (and successful) juggernauts on the planet (and Lance Bass' whole space quest), but we're still willing to give credit where credit is due. While their contemporaries are firing up the reunion machine, *NSYNC are content to let the past be the past.
posted 10:48 PM

As usual, MTV tends to oversee important examples such as Led Zepellin. They swore they wouldn't get together...as for now, it is true.
ard

I'm more in favor of a Kyuss reunion myself.