Swedish paper, AftonBladet, has published a new interview with British journalist Mick Wall this weekend. In it, he talks about Axl Rose and Guns N' Roses. Full interview after the jump. 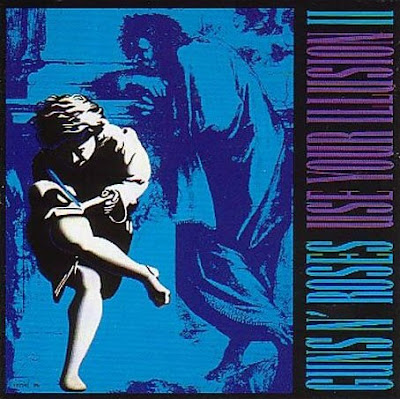 Mick Wall's life changed in five minutes and forty seconds. It was 1991, and the British music journalist had just listened to Guns N' Roses' new album, Use Your Illusion II. One of the songs was called "Get in the Ring."

"I get emails from people who weren't even born when the song was recorded, who say that they want to beat up me. I knew immediately that I would spend the rest of my life talking about that song."

Wall and a handful of other journalists had, for various reasons, gotten on Axl Rose's bad side. The singer in the world's greatest rock band threatened to fight them, and urged them to "suck my fucking dick" in a song would that be heard by millions of fans. Nearly twenty years later, the now 52-year-old Mick Wall is still reminded of it.

"God, yes. You can see it on all those websites that have fans of "Get in the Ring." People still want to talk to me about it. On my tombstone it will say "Mick Wall - Get in the Ring, Motherfucker," he says and laughs.

Did you ever feel threatened?

"No. Axl is a little guy with the stick-thin arms, he's no fighter. When the song came out I told his people that I would show up at any time if he wanted to talk. The others named in the song have done similar things, and Vince Neil - Axl has also threatened him - offered to come to the record company and make up. But Axl always pulled away."

In the years since then, the charismatic front man continued to pull away - from the old band members, friends, girlfriends, managers and journalists. W. Axl Rose, 48, is an unsolved puzzle. Is he crazy? A misunderstood genius? And what did he do for fifteen years between GN'R's second-to-last album (The Spaghetti Incident?, 1993) and their latest (Chinese Democracy, 2008)? Is it true that he burned through $72,000 dollars for an exorcism? That he tried regression therapy and began to remember past lives as an Indian? Is it true that he consulted a female guru named "Yoda" on absolutely everything? That she studied photographs of people who applied for jobs with him, and sorted out those who had "bad karma?" That Yoda told Axl that one of his personal staff had tried to assassinate him in a past life, and that Axl had that person fired?

Mick Wall - who has written the book WAR: The Unauthorized Biography of W. Axl Rose and could be a Ph.D. in "Axl Science" - does not hesitate with the answer.

"All true. And the reality was, and still is, much, much worse than that. He is the weirdest rock star in the world today. We're talking Rock's Michael Jackson here, or the last days of Elvis Presley's life. Axl is not just a crazy rock star, he is a man with deep emotional problems."

"He has no friends other than his half brother. The only people that spend time with him are people who work for him. When he's not touring, he's in his house, watching television or surfing around online and see if anyone has written anything about him. He sleeps during the day and is awake at night. He has made himself an enemy to all his old friends, including all of the old band. I just talked with Izzy (Stradlin, the guitarist for GN'R 1985-1991) who said that Axl calls him sometimes and says things like "you said something to me in 1996 that I can not forgive you for." Izzy can hear the sound of rustling papers in the background, as if Axl has written up all these little notes to remember it. I mean, who is like that? It's crazy!

The fact remains, a band called Guns N 'Roses will enter the stage in Blekinge Norje tonight and perform classic Guns N' Roses songs like "Welcome to the Jungle," "Mr. Brownstone" and "Paradise City." But what you will see is not Guns N 'Roses, just Axl Rose and who he pays to play with him. The former Guns members would love to reunite and tour with Axl, but they don't want to pay $200,000 the next time he starts a riot somewhere because he didn't show up. It's all very sad. I predict a sad end to this saga."

You think that he will die prematurely?

Mick Wall is quiet on the other end of the handset. Then he sighs and says, "I think he's already dead. He has turned his back on life."

slash , rock , summer , festival and topless girls bouncing on the outro of the greatest song ENJOY

come on John :D i know u've got ur own forum but pls post it also at mygnr . so the haters see how this song should be played

no your not , somebody asked and the admin said your not

bacardiblablabla was the one that asked

I'm not technically banned, but my posting privileges have been permanently disabled.

here's also the press conference from Download written and Video

slash was a highlight for press and fans http://twitpic.com/1wgbjf

"Forgive them that tear down my soul / bless them that they might grow old / and free them so that they may know / that's it never / too late." - 'Madagascar', Axl Rose.

Slash and Myles Kennedy talk about the getting the new album out on the road and what it will be like to play Glastonbury for the first time.

Those are the kind of people that get me down. They make me feel like somebody, somebody out there ... is out to get me!" - Set-up to Out Ta Get Me, Ritz '88, Axl Rose.

Fuck you Mick Wall!
He still got that in his fuckin ass that's why he said that kind of things!!
U suck Mick Wall!!

And really, Mick Wall gets attention from gn'r fans?!
FUCK HIM!
ard

As well as Slash future classics, the band gifted Download with Guns N’ Roses classics, including the lesser-played ‘Rocket Queen’. Myles is no Axl, and thank fuck. With a smile the size of an actual cat, he stalks the stage, points, grins and wails. Even Axl’s signature ‘Sweet Child O Mine’ doesn’t miss him, the song dripping with guitar work so distinctly Slash.