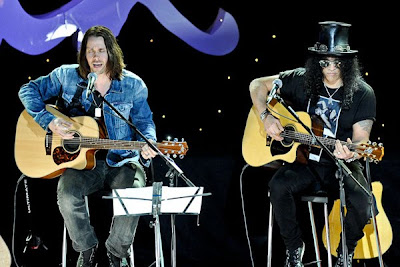 The intimate gig happened at the Seymour Centre in the inner-city of Sydney and Triple M's Alexis Savaidis was one of the 300 lucky fans to witness the magic.

"It was a flawless performance," stated Alexis. "Myles blew everyone away with an impressive vocal range hitting insanely high notes. And, of course, Slash was unreal! Doing those solos on an acoustic guitar is really only one for the masters and he did it so well."

She also said that Slash answered questions from fans during the set which revealed a lighter side to the guitar legend.

The setlist was as follows:

"Max Sessions: Slash" will premiere on Max on Saturday, October 16 at 7:30 PM on Foxtel.

Read more, and check out a photo gallery, from Triple M.