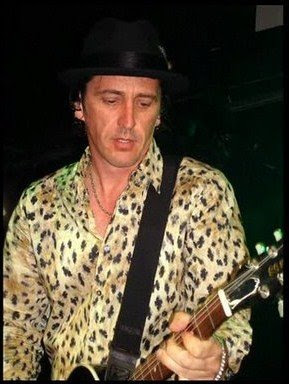 In the only interview that he’s granted this year, Izzy Stradlin tells our correspondent in Brazil, Thiago Sarkis, just what any follower of this man wishes to know: Why he decided to tour again with Axl Rose, how he feels about the possibility of a GN'R reunion, how his present relations are with Slash, Duff, Steven and company, and how he remembers the glory years of the band.

What have you been doing the last two or three years? If time is difficult to track, can you talk about the discs Miami and Fire?

Izzy: “Sure. Every year I record material. The album Miami - I recorded it years ago in Miami, Florida, in an old studio where they had worked with people like James Brown, The Eagles and Fleetwood Mac, a fantastic place. After that album, I recorded Fire in a very short period of time. One is simply a more basic version than what I usually do."

Do you think that fans can appreciate facets of you as a solo musician that couldn't be seen in Guns N' Roses?

What are you working on now?

Izzy: “Right now I am in contact with people in Argentina that want us to tour there, and I would really like very much to do it. Recently I have recorded another disc called Concrete and that you can acquire through iTunes."

Before you spoke of the process of composition in Guns N' Roses. Since then, Slash became an icon, thanks to his attitude, his image and his style as a guitarist. Nevertheless, we who followed GN'R from the beginning, know that you were one of the main composers of the band. How would you describe the way you worked with Axl and Slash in those years?

Izzy: “There was a chemistry there that worked well. Sometimes, our way of work was slow and difficult, if I compare it to what I do now, but the main thing was that the results were very good. Now, everything is easier for me. It’s much simpler to write for my band. Now I don’t have to discuss it with two other people whenever I write something."

Do you think that your role in GN'R was the one of creative composer, whereas Slash existed mainly as guitar-hero?

Izzy: “The other day I read somewhere that Slash is the last guitar-hero of history. (Laughter) I don’t know. I don’t know how to respond to that."

How was your relationship with Slash, as much at a musical level as at a personal level?

Izzy: “Musically, we contributed things mutually, and we tried to put in more effort than the others. (Laughter) And at personal level, we took many drugs together in the ‘80s, and after a time got we clean and left it. I still consider him a friend and we stay in contact."

You returned to tour with GN'R in 2006. How did you get back in contact with Axl?

Izzy: “I don’t know. It’s been two years since we did that tour of Europe … it’s hard to think … I believe that they gave the number me of his management … No, now I remember: I went to his house, then he called me because they were going to do shows in New York and I said to him: “Hey, why don't I play with you? It could be great." And we did it. And then we toured Europe."

At that time you had already solved your problems with him?

Izzy: “See, I’ve known him for so many years, that there is a familiarity between us. We grew up in the same place, the same atmosphere, and I believe that part of our friendship always will be there."

I’ve always read that you are a calm and reserved type, who doesn’t like to tour or to spend too much time far from home. What made you want to get back together with GN'R?

How did you feel at your first show with the new Guns N' Roses?

Izzy: “I arrived at Heathrow airport, I rode in a van and they took me to the Donnington Festival. I had fatal jet lag, but I went to the scene and I felt better instantly. It’s magic."

Much has been said about the present formation of Guns N' Roses. What’s your opinion of the present band compared to the original Guns N’ Roses?

Izzy: “They are more together than we were. (Laughter) Those guys are great musicians. We let ourselves go more."

But do you like the way they interpret the songs or do you prefer your ‘80s style, more direct and wild?

Izzy: “During that tour I only played four or five songs a night and didn’t see a lot of the show. So, I really wouldn’t know.”

Which GN'R song is most special to you, and why?

Izzy: "Knockin' on Heaven's Door” was brilliant. The fact that we took to an old Bob Dylan song and turned and it into this enormous hymn was really special."

How did it feel to play four or five GN’R songs every night? Did you have to learn some of them again?

Izzy: “Yes I had forgotten them almost completely. I had to learn to play them again.”

Which song was the hardest?

Izzy: "Nightrain.” I kept forgetting the part in the middle, I don’t know why, after all I wrote it!"

I have heard that you are in contact with all the original members of Guns N' Roses. How is your relationship with them?

Izzy: "Slash, Duff, Matt and even Steven Adler, we all call each other from time to time, and sometimes we see each other in Los Angeles or where ever. We all have very good relationships. We are all still friends."

Steven Adler has spoken frequently lately of his desire for a reunion of the original GN'R. Tell me what you think of that and how your relationship with Steven is at the present.

But if it were to occur, you would consider the possibility of a reunion?

Izzy: “Yes, of course. I wrote a great deal of that material."

You said once, when Matt Sorum entered the band, that you missed the style of Steven Adler. What differences did you see between the two of them?

Izzy: “Steven had a more accidental style and Matt is more precise."

Have you read Slash’s autobiography?

Izzy: “No, I have not read it. I listened to something about it on the radio the other day and it seemed to me to be gracious."

Slash comments in the book about the last shows that you did before you left the band, when you asked Axl to show up on time.

Izzy: “Axl continued arriving at each concert behind schedule. In 1991, the regular thing was that Axl delayed each concert, like minimum, two hours."

Why did you reject the invitation to reunite with Velvet Revolver?

Izzy: "I wanted it to be a quartet: Slash, Duff, Matt and I, but they really desired a singer, and as we know, singers can be quite problematic sometimes. So I simply decided to follow my own path."

Is it true that you suggested that you Duff would take care of the vocal tasks in the band?

Izzy: “Yes. That would have been better."

How did they respond to that idea?

Izzy: “I believe that Duff liked the idea, but Slash said no."

Don’t you think that Scott Weiland was the worst decision for musicians like them, who had so many problems with Axl in the past?

Izzy: “That’s a very legitimate question, but I don’t have an answer."

It was impossible for something like that to work.

As I commented to you before, your public image is the one of a calm and reserved man. Is it hard for you to have to always respond to questions on GN'R from fans and the press?

Izzy: “You are the first journalist with whom I have spoken this year, so it is not something that I do quite often (Laughter).”

Izzy: “In the last years I’ve limited myself to releasing one disc every year with iTunes, and I don’t give any interviews."

But, how you feel being an ex-member of the greatest band in the history of the rock?

Izzy: "It’s insane when I’m going to a store to buy cords for my guitar, and the young employee tries to sell me a Les Paul Guitar with Slash’s name on it. (Laughter) The guy asks me: ' Have you seen the new Slash Les Paul guitar?' I respond to that no, and he says to me: 'Oh, we just got five today!’ (Laughter)”

That must be strange for you, but at the same time, I imagine that you feel good knowing that you were part of the same band.

You can read Part II of this interview here.

How did they respond to that idea?

Izzy: “I believe that Duff liked the idea, but Slash said no."


That was one of the biggest mistakes Slash has ever done.