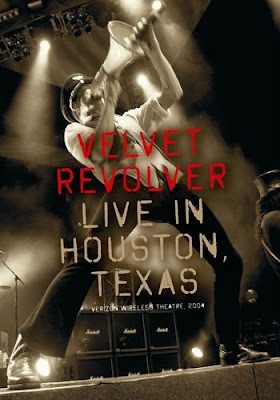 via Blabbermouth
Eagle Vision has set a November 16 release date for the Live in Houston DVD from Velvet Revolver.

Footage for the set was filmed in Houston, Texas in 2005 during the tour in support of the band's debut album, Contraband.

The full-length live tracks are intercut with snippets of interview with the various bandmembers talking about how Velvet Revolver came into being. The set list, naturally, focuses on that debut release but is complemented by two tracks from the Guns N' Roses catalog and two songs from Stone Temple Pilots debut album, highlighting the history of the VR bandmembers.

Fancy the content I have seen so far and I am your regular reader of your blog.

I am pleased to see my blog in your blog list.

Hope to see a positive reply.

Thanks for visiting my blog as well !

Waiting for your reply friend !!!!!

Don't give a shit about VR.

But no, here i am watching a DVD no one even knows how it's going to be promoted...Weiland and Slash doing interviews? Uau, i'm impressed.

@Mack
you're forgiven ;) thought in the states were - 4 hours eheheh

Adding: Duff also played Sorry. Which I think is pretty ironic, since IMO it's the most "fuck you,slash" song of Chinese Democracy.