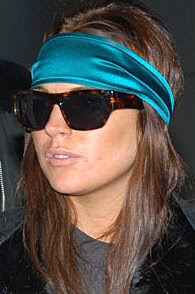 I don't work in the movie business, but I'm guessing things are pretty bad when that happens to you.

Velvet Revolver is looking for a new singer - the stars are aligning.

Velvet Revolver was huge when they emerged as a super group because they satisfied people's appetites for the GN'R and STP of yesterdays. If they come out with a new record, I wouldn't want to see it disappear like a Libertad II.

Getting some unknown singer may just not really do it the second time around.

I knew that Lindsay might be interested when I read this story on how she wanted guitar lessons from Slash.

Lindsay Lohan has been begging former Guns N' Roses guitarist Slash to help her brush up on her strumming skills. She said: "Can you maybe give me guitar lessons? I've lost any sort of magic touch I've ever had."

They're not going to be making a grandiose Picasso or Monet painting. It's just rock 'n' roll. I don't think it really matters if she can sing that well. Slash and the gang have got a ton of riffs, and I can see that this would be a success. Also, Slash is friendly with Lohan, and this past April NME reported that

Slash has said there will definitely not be a Guns N' Roses reunion - as he only wants to work with ladies now.

Lindsay's a triple-threat - actor, singer and dancer. Or if you prefer - drug addict, ex-con and porn-star. Ke$ha is just a poser. Lindsay Lohan is a lot more rock 'n' roll than what's out there, and she's also a Ginger.

Please tag your tweets with #LL4VR if you want to see this grassroots campaign succeed.

She should at least get an audition.

Hei Mack, you should try out for open mic night as a stand up comedian!