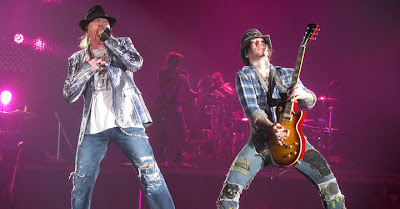 During an interview with the Artisan News Service on the "black carpet" of this past Thursday night's (November 4) party to promote the release of the new video game Call Of Duty: Black Ops in Hangar Eight at Santa Monica Airport, California, GN'R guitarist Dj Ashba said that fans won't have to wait long for the band's next studio album.

"We're talking about that right now," he said. "We've been throwing around a bunch of ideas and it should be good, man. We've got a lot of good stuff on the plate coming out. It won't take as long, I promise. Yeah, I'm excited to get this next one rolling. A lot of great shit. Axl has a lot of good shit up his sleeve, so I'm really excited about it."

Dj also confirms that GN'R will tour the States in February 2011.

I don't hear him confirming an album in 2011 at all. Article title is misleading to say the least.

If it happens, wonderful! I'm not going to bother crossing my fingers though until much more is said or officially announced.

sounds pretty good to me.