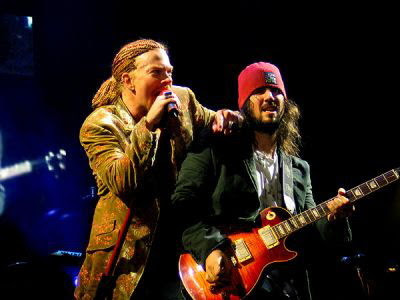 via Blabbermouth
Ron "Bumblefoot" Thal has shot down as false rumors that his time in the band is coming to an end over his alleged dissatisfaction with his position in the group.

In a recent days, a number of unsubstantiated online reports have surfaced that have alleged Thal is "complaining DJ Ashba is getting paid more for each show" than Ron is, and that Thal is unhappy with the fact that certain other members of Guns N' Roses "had/have more to say about the direction of the band musically/performance-wise" than he does.

In a statement that was posted on the GN'R fan site Here Today... Gone To Hell!, Thal addressed the online chatter by saying, "Some trolls tried to get attention by starting rumors, as they had seen others get. I called a few out on it personally, smacked 'em down and their panties are still all bunched up over it, so they've been going to different GN'R fan sites, they create an account with an IP scrambler, post these fake stories, and then disappear. They're 1) trying to get me back for bruising their ego, 2) they're trying to mindfuck the *real* GN'R fans and make them lose faith in the band and bandmembers they've gotten to know over the years, 3) they saw someone else get a lot of attention in a similar scenario recently, and want some attention themselves, from fans, and from me. All they want to do is hurt the fans and the band. All the credible GN'R fan sites see it and have been deleting the silly posts by their own choice.

"Don't buy into it. Don't stand for it. And don't believe a WORD of it.

"If the people spreading this would like to come forward and show who they are, I'd be happy to bring them into a courtroom with a libel suit, and if they can prove their statements to be true, I'll cover all costs and whatever else. But that wouldn't happen, because every word of it is made up and that's why they don't stick around and remain in hiding.

"To any news sites that spread the rumors without fact-checking, that'll post anything any sociopath makes up and give it a platform, you need to do better.

"To sum it up, I have a life, you have a life, these particular trolls don't — they're just trying to tear us both down, because they're bitter.

"'All that is necessary for the triumph of evil is that good men do nothing.' (Edmund Burke)

"Don't give these people power, and don't do nothing. Find out who they are, and hold them personally accountable for fucking with you and the band.

"OK, back to making music, loving my band, my family, the fans, and looking forward to seeing you all as soon as possible."
posted 9:57 PM

The problem is that since there is never any kind of communication from GNR (AXL) except for maybe a rant on something once a year, it leaves the door wide open for any kinds of rumors to spread. Without information flowing rumors have a funny way of taking hold by fans who want to know whats going on.