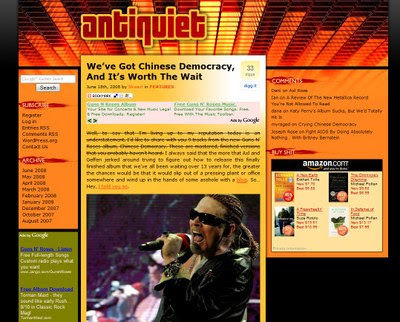 On or about June 18, 2008, defendant received unauthorized copies of songs purporting to be nine musical tracks from the album Chinese Democracy performed by the rock bank Guns N’ Roses. A valid United States Copyright existed on each of the nine songs of the Chinese Democracy album, which on June 18, 2008, had not yet been released but was being prepared for commercial release by Guns N’ Roses and Universal Music Group’s Interscope-Geffen-A&M records (the record label).

Within minutes of receiving the unauthorized tracks, Mr. Cogill uploaded the tracks to his Internet website Antiquiet.com. The tracks were not made available for downloading but only for listening in real time by a streaming player. At the time, Mr. Cogill was aware that the musical tracks were protected under United States copyright
laws, and he was aware that he did not have authorization to upload the songs over the Internet and that to do so was illegal.

To view the rest of the documents click HERE.
posted 6:35 AM