The Return of Camp Freddy 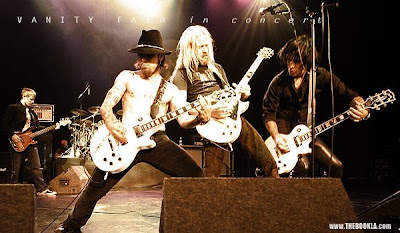 Camp Freddy returned to the Sunset Strip on Saturday night for the Annual ESPN X-Games party at The House Of Blues in Los Angeles.

The band played for over an hour, opening with Deep Purple's "Highway Star," and culminating with four Ozzy Osbourne/Black Sabbath songs featuring Ozzy himself. "Iron Man" and "Crazy Train" featured 3 guitarists - Steve Stevens, Dave Navarro and Billy Morrison. Ace Frehely joined the band on guitar for "Cold Gin" and "I Wanna Rock And Roll All Night."

Camp Freddy are also scheduled to appear on September 10 at The House Of Blues as part of the Sunset Strip Music Festival. The show is on the opening night of the Festival.

Billy Morrison confirmed that a Camp Freddy television show is in the works for 2010.
posted 12:11 PM