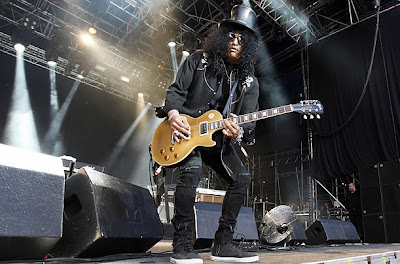 1. Jimi Hendrix
The greatest of all time? Maybe. No one merged the blues, rock and psychedelia with as much ease, or wielded his guitar with as much charisma.

2. Slash
A remarkably precise player who had to put up with more crap from his lead singer than any guitarist on this list. Does he make the cut partially because of the hat? Yes. Yes he does.

3. BB King
He doesn't call his guitar Lucille to be cute. With King's emphasis on vibrato, she sounds like a real woman singing the blues.

4. Keith Richards
The most notable of Chuck Berry's many disciples is also the creator of more memorable riffs—"(I Can't Get No) Satisfaction," "Jumpin' Jack Flash," "Gimme Shelter," "Start Me Up," etc.— than anyone in rock and roll.

5. Eric Clapton
Fluent in every blues style, Clapton is probably best known as the king of the Tulsa Sound. He's also among the most melodic of guitarists, using his solos to move a song along instead of stopping it cold.

6. Jimmy Page
Page's guitar sounds like six guitars, and the heaviness of his right hand is key to the instant recognizability of Led Zeppelin's sound.

7. Chuck Berry
The father of rock and roll guitar, his staccato influence is still heard on most songs today.

8. Les Paul
An amazingly talented guitarist, Paul had a series of futuristic sounding hits in the 1950s. But his music has been superseded by his invention: Paul pioneered the design and construction of the modern electric guitar, which made everyone else on this list very rich.

9. Yngwie Malmsteen
The Swede's superfast "neo-Classical" style —he credits Bach and Paganini as influences—is a blur of scales and technical precision. It almost makes you forget that the great bulk of his music is so fast that it's unlistenable.

10. Prince
He does a little singing, but Prince also plays a mean lead guitar. The solo on "Let's Go Crazy" is a frequently cited example of his frenetic style, but covers of "Just My Imagination" and "While My Guitar Gently Weeps" prove he can also play under control.

11. Johnny Ramone
No one hated guitar solos more than Johnny Ramone, so it's not surprising he perfected the Punk style, packing chords together tightly and leaving no space for freelancing.

But seriously, although I wouldn't rank Slash #2 in the World, you have to admit he's very popular.

No EVH? Let the debates begin...

Name recognition scores!!
Ok- Hendrix, Berry, Les Paul, Page deserve to be there in the top 10 for sure- not just because of talent but innovation and style recognition by audiences....
No Eddie Van Halen???? Where were you in 1978?? Eddie easily rates #2 behind Hendrix in style recognition/innovation. Sorry Slash! The rest is pretty much uninformed opinion

Name recognition scores!!
Ok- Hendrix, Berry, Les Paul, Page deserve to be there in the top 10 for sure- not just because of talent but innovation and style recognition by audiences....
No Eddie Van Halen???? Where were you in 1978?? Eddie easily rates #2 behind Hendrix in style recognition/innovation. Sorry Slash! The rest is pretty much dart board opinion