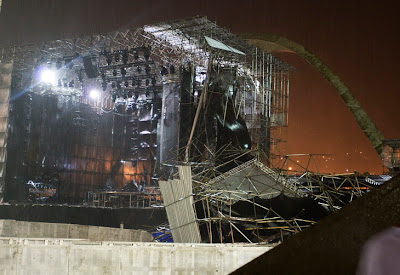 Spinner
Axl Rose is quickly learning that the jungle isn't always that welcoming, as Guns N' Roses were forced to cancel Sunday's show in Rio De Janeiro, Brazil due to the stage collapsing from heavy rains. Rose explained via Twitter that the show might go on tonight or at a later date, as they're still assessing the damage. But it's not to say injuries weren't suffered.

"There fortunately are no fatalities but there are injuries from both our camp and Rio crews," Rose wrote, also revealing that a truck affiliated with openers the Sebastian Bach Band rolled over several times en route to Rio as well. He later updated to say "all injuries appear to be minor." Bach also posted a picture of the mangled stage, which Rose said may have been hit by a tornado.

So things aren't going well for old Axl in South America. Australia's News.com reports that this past Thursday, a riot broke out at a Sao Paulo club where the band was supposed to perform a secret gig, a la the recent Fashion week performances. Attendees reportedly mounted the stage and destroyed whatever they could once they found out that the band was pulling a "no show."

That resentment seemed to carry over to the official gig on Saturday night at Sao Paulo's Estádio do Palmeiras, where Axl was pelted with a bottle during the band's opening number, causing him to stop the song and say, "C'mon, coward. You wanna fuck up the show for everybody? 'Cause I've got no problem - I will leave. We will all leave. You wanna play games? You can fuck yourself or we can have some fun. You guys wanna have fun? Then I don't need no little fucking pussies like we had the other night at that club. You wanna fuck with me and my boys? We will leave."

Guns N' Roses resume their tour tomorrow night at Porto Alegre's Gigantinho and are scheduled to play through April 1, where the road show concludes at Quito, Ecuador's Estadio Olimpic Atahualpa.

how is this karma?