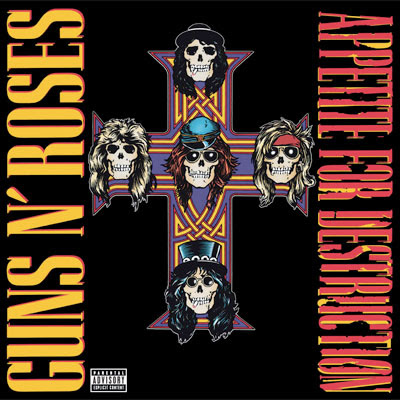 I think I am ready to call this one as the best hard rock album ever. It's that good. I remember buying this on cassette as a kid; it was one of the first I ever bought, if not the first. Not sure whatever happened to that cassette but I now have this on CD, as should anyone who listens to rock. There is no filler on this record whatsoever. The vibe jumps off the speakers into your body with an electricity that makes you feel you're in front of the stage circa '87, rubbing elbows with the dissident dregs fresh off the streets of L.A.

There are no bands these days that even come close to this type of vibe, licks, or writing. The attitude of this record just slaps you right in the face. It holds up as well in 2011 as it did the day it was released. If anything, I have much MORE appreciation for it now, realizing how mind-blowing the whole thing is. You can just feel the intensity coming from all of the band members listening to this. And of course, it features one of the greatest lead guitarists ever, showing his prowess like a ferocious lion.

If you were around when this came out, a lot of the songs are sure to bring you a wave of nostalgia as well. They might even if you weren't around back then. Everyone has heard the singles from Appetite a hundred times or more but let me tell ya, they don't ever seem to get old and they sound a lot better off the CD even than on the radio. To sum up, I would consider this basically the untouchable reigning masterpiece of hard rock and I don't think anyone could ever top it.

Axl sums up the overall attitude of this record very well at the end of Out Ta Get Me when he says, "So you can suck me-- Take that one to heart!"

P.S. This recording was played with a lot of soul that no one plays like anymore.
posted 11:11 PM