Nobody Chooses Addiction, Not Even Amy Winehouse 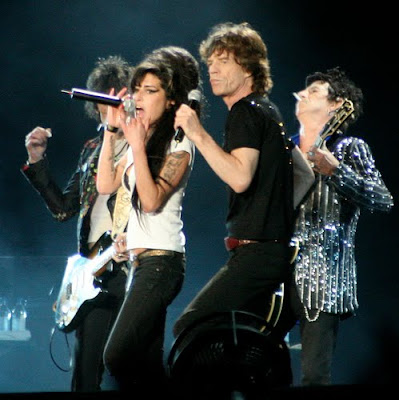 By Duff McKagan
Seattle Weekly -- REVERB
​Like everyone else this side of the pond, I woke up Saturday morning to hear the sad and terrible news that singer Amy Winehouse was found dead in her London apartment. Like everyone else, too, I suddenly felt a great loss and not a little bit of anger.
In my head I yelled at her, "C'mon, girl! It seemed as if you were pulling OUT of that drug shit! It seemed as if you were on your way back! It seemed as if maybe, just maybe, you'd be putting that troubling time behind you..." But no. It wasn't to be after all. Alas, the Winehouses do not have their daughter Amy anymore.

In the late '80s into the '90s, there was a mess of drug-addled youth in their 20s in and around rock and roll music--buying into the "Live Fast, Die Young" mantra and all of that stupid and ignorant rot--that I found myself and my circle of friends a part of. I lost two of my very best friends to overdoses. And for a while it seemed that I'd most certainly go that same route.

But I had good people around me, a network of friends and family that some of my peers didn't have. It was those people, who when I saw a chance to get better, and get sober, it was they who called and stopped by, and showed me how to stay away from the bad stuff--taught me how to stay alive.

Amy lived her life for the last eight years in a fishbowl. We all peered in when she had her great and worldwide success. We all gawked at that same fishbowl as we watched her stumble again and again. Our view into the fishbowl changed as her life's trials changed. But her view OUT of the fishbowl never changed. I'm sure it was claustrophobic and terrifying in there. For those of you who may say "Yeah, but she had EVERYTHING! Why would she waste her time on drugs; she should have JUST GOTTEN SOBER!", let me just say a few things:

-- No one loves to be addicted.
-- No singer or musician I have ever known has dreamed of one day being successful AND strung out.
-- Do you think Amy's success changed HER more, or do you think it is possible that her success changed how other people treated her more?

People who become that high-profile in an overnight fashion rarely have the time or guidance to really know what the hell is going on once that massive "fame monster" smacks them upside the head. She was suddenly on TV and the radio all of the time, she suddenly had a #1 record all over this planet, and won five Grammys. All at once, we expect these people to adjust how we perceive we ourselves would adjust in the same limelight. When that doesn't happen in Amy's case, the tabloids are right there to show us all that "this girl is just plain fucked-up." Maybe she never got a chance to catch her breath.

The "specialists" and talking heads on cable news are criticizing Amy Winehouse's inner circle of "advisors." I know Amy's manager and accountant, and I also know that both of them are VERY stand-up people. It is a shame that people like this, people who have tried their best to help Ms. Winehouse in the past few years, get their names dragged through the mud. But in the end, it is just so sad to have lost this young woman to what will most likely be discovered to be, drugs. She was a talent. She was different. She railed against the norm. She was a musical trailblazer.

In the end, I cannot compare what I went through or experienced with what Amy Winehouse went through. I only know that addiction is a lonely and terrifying place to be. It's not glamorous, and addiction does not care if you are well-known and rich, or a loner-hermit with no dough.

In Amy's case, like mine, I think she had some friends and family who tried and cared about her, but in the end fell short.

I'm sure she must have been a good friend to some people.

I'm sure her parents must have watched with joy as her musical talents blossomed in her young teens at school.

I'm sure that they must really miss her right at this very moment.