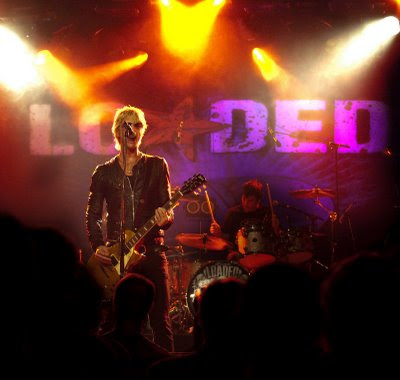 Photo (c) by http://www.katrinbretscher.com
Blabbermouth
Duff McKagan's Loaded has just returned from a European trek and is about to go into production for its upcoming feature film, The Taking. Helmed by Seattle filmmaker and documentarian Jamie Burton Chamberlin, this rock 'n' roll flick is a series of "vignettes" that explores the lyrical content of Loaded's recently released studio album of the same title.

In a November 2010 interview with West Seattle Herald, Chamberlin said that the film "will be a contemporary version of, say, Hard Day's Night meets The Song Remains the Same, with aspects of documentary, music video, and live performance, all interconnected by an underlying motivation. The album will serve as the soundtrack." He added, "Everything will be shot in Seattle and the Northwest. We hope to use locations in West Seattle and other familiar settings to create these vignettes that develop organically within them."

Chamberlin told the West Seattle Herald that McKagan may push to have the piece released in the film festival circuit to offer exposure to a wider audience beyond his music fans.

"Not a lot of artists out there are interested in going to this extreme of having their music interpreted in film," said Chamberlin. "This project wouldn't be happening without Duff's vision, and the support of people like Rick Canny at Sanctuary management, LOADED's manager.

"Duff is a super guy, one of the nicest guys you could meet. He has shown a strong commitment to getting this project off the ground. He's got a great business sensibility and is totally creative, qualities that draw me to him as an artist. He's just a classy cat."

In addition to the film, fans can also look forward to a few stateside dates, including a stop at Rock On The Range Canada in Winnipeg on August 20, KISW Pain In The Grass in Auburn, Washington on August 27, and PDX Rock Festival in Hillsboro, Oregon on August 28. More U.S. dates will be announced soon.
posted 6:06 AM

Hey, once you're stealing pictures without asking, you could at least post a credit. This photo is (c) by http://www.katrinbretscher.com .