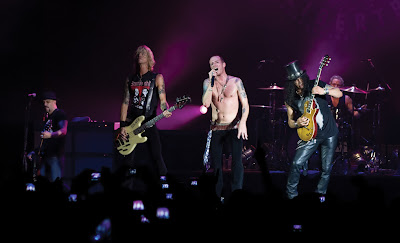 ULTIMATE Classic Rock
Never say never. That’s the viewpoint Stone Temple Pilots singer Scott Weiland had adopted when it comes to his other former band, Velvet Revolver. Weiland reports that he is once again friends with Slash and the rest of the group, and says not to rule out an on-stage reunion at some point in the future.

In a recent interview with Classic Rock magazine, Weiland reflected somewhat wistfully on his time in Velvet Revolver, which paired him with former principal members of Guns N’ Roses, saying, “That was a magical thing, too. That was right when I was getting off dope and those guys were all sober and clean, and I had a very special kind of kinship because we’d all experienced the same things.”

Weiland intimated that there was a fraternal camaraderie in the band: “It felt like us against the world: ‘We’re gonna play just pure rock ‘n’ roll.’ And I think we did a really good job of it. It was a great band to see live, and I think we made two exciting albums.”

So it’s great to see that after the expected nastiness that follows a breakup, the musicians are all friends again, even staying in contact thanks to technology. Weiland admitted, “We patched things up and we get along. I see them every now and again, we text each other.”

He also offered up a little sliver of hope to diehard VR fans, saying, “And you know, we can never say never. Who knows, maybe we’ll do some shows some time.” That’s good news, especially since Velvet Revolver still haven’t found a replacement for the singer, having shelved recent material recorded with Slipknot’s Corey Taylor.