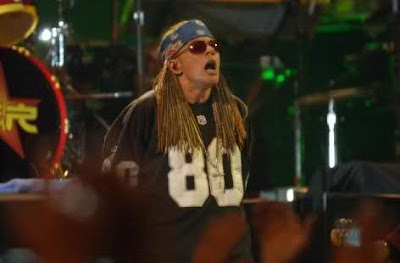 via Gibson.com
Manager and producer Alan Niven is currently telling his side of the Guns N’ Roses story in a three-part interview with Metal Sludge.

In Part 2 of the interview, Niven talks about the band’s big breakthrough, which came on the back of a strong live reputation and a few late night MTV plays. “MTV put the band on overnight, when you had to use an alarm clock to see the videos,” Niven said. “But even in overnight, ‘Welcome to the Jungle’ got a reaction, so MTV started moving it up. By March of ’88, it had gone gold. Then on April 7, 1988, it went platinum.”

Niven also opened up about talking Axl Rose through his stage fright, which threatened to cripple the crucial tour with Aerosmith that proved to be a key turning point for the band. “He’s a singer, and singers who have to go out there three, four or five times a week, they invest their spirit in what they’re singing,” Niven said. “The guitar players have something in their hands. They’re not naked. The singer is out there naked, and sometimes that’s hard to do. Obviously, Axl still has problems with it because he’s still late.”

Niven, who also managed Great White, is currently working with guitarist Chris Buck – who Niven said is the best guitarist he’s ever worked with – and Arizona band Storm of Perception.

MTV Interviews: "It was like Spinal Tap with money"
posted 8:52 AM