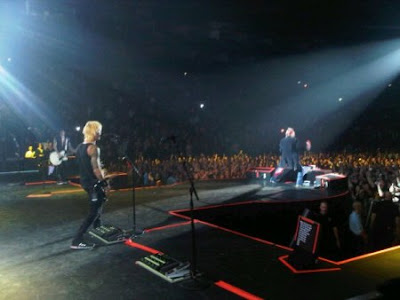 The band will start the concerts in Nottingham on 19 May.

They will then play dates in Liverpool, Newcastle, Glasgow, Birmingham and Manchester before finishing at London's O2 Arena on 31 May.

The original members of Guns N' Roses are due to appear together on the same stage in April as the band is inducted into the Rock and Roll Hall Of Fame.

Guns N' Roses last performed together in the UK in 2010.

They were bottled off stage at a concert in Dublin after they arrived on stage nearly an hour late and their set was cut short after they played past their curfew at Reading that year.

The band say they are working on new material at the moment.

Their last album, 2008's Chinese Democracy, made it to number two in the UK album chart.

The UK tour dates are as follows:

Tickets for the tour go on sale on Friday 3 March at 9am.

Discuss this article with other Guns N' Roses fans here.
posted 6:48 AM