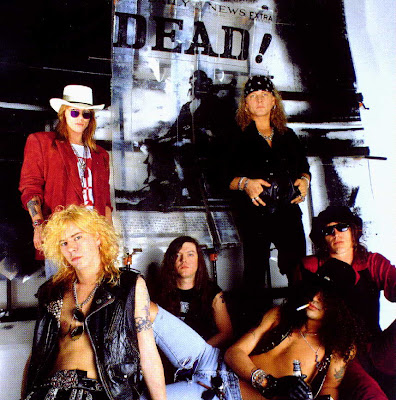 Billboard
Whether the group plays together or not remains to be seen, but it appears there will be some sort of reunion of Guns N' Roses' original lineup at the Rock and Roll Hall of Fame induction ceremony on April 14 in Cleveland.

"I know that all the original band is going to be there," keyboardist Dizzy Reed, the longest-standing member of the current GN'R and an inductee that night, tells Billboard.com. "I don't know exactly what's going to go down. It's one of those things I'm sure will all come together and be really cool. I'm just going to go in with a good attitude and a clear head and a grateful heart."

Fans have been abuzz about whether the GNR crew -- which will also include continuing frontman Axl Rose, guitarists Slash, Izzy Stradlin and Gilby Clarke, bassist Duff McKagen and drummers Steven Adler and Matt Sorum -- would put aside well-publicized differences at the ceremony and pick up their instruments together. Nobody has said for sure what will happen, and Adler has even expressed open doubts about the possibility. Reed, meanwhile, says it's not even been a topic of conversation between he and Rose since the Rock Hall's class of 2012 was announced in December.

"Honestly, we haven't spoken about it," Reed says. "I don't know when or why or how to bring it up. It's not an every day sort of thing. So we haven't really talked about it -- but I'm sure we'll have to at some point."

Reed calls the Rock Hall honor "pretty cool...especially when you think about all the people who are already in and helped make rock 'n' roll what it is. It's a real who's who of great musicians." The keyboardist adds that he's also excited "for the people that have supported Guns 'N Roses over the years. It's really cool for them more than anyone else. To me, that's the most important thing."

The current GN'R, meanwhile, is playing more than celebrating. Following an arena swing in 2011, the group is playing seven club and theater shows, including three in New York City and in Chicago, Detroit, Silver Spring, Md. and Atlantic City. At the group's Feb. 10 show at New York's Roseland Ballroom, Rose and co. tore through a 150-minute set that included their Appetite for Destruction hits and some deep cuts from Chinese Democracy, leaving the small crowd delighted.

"It's always cool to change things up like that and be a little more intimate with the crowd," Reed says. "Obviously we have to scale things down a little bit. The stage won't be quite as big. Hopefully there won't be as much pyro -- I always feel safer when there's not."

GN'R will return to bigger spaces in mid-May, when it begins a European tour of arenas and festivals -- including the Gods Of Metal weekend in Milan, Italy -- although Reed notes that "if they throw in some club shows here and there, I've got no complaints. I'm totally into it."

And how about for work on a follow-up to 2008's Chinese Democracy? "There are some clamoring and rumors that we might be getting some material together here after we do this little (theater) run, so we'll see what happens," Reed says. "I just go with the flow. I'm always recording and stuff. If it happens it will be really fun and cool. I love creating stuff with all the guys. And there was so much material that didn't make it onto (Chinese Democracy). From what I remember there were a lot of really cool songs; I can only hope that some of that stuff does resurface and get worked out."
posted 4:04 PM