Axl: I'd Rather Go Out With A Dolphin 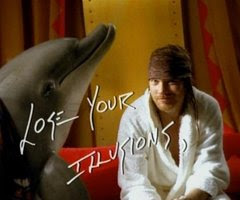 I Want My MTV: The Uncensored Story of the Music Video Revolution - a new book by Craig Marks and Rob Tannenbaum, collects interviews with over 400 key people from MTV's Golden Age. In one excerpt, "Estranged" director Andy Morahan talks about the making of the video.

Says Morahan "By the time we got to 'Estranged,' Axl had split up with Steph­anie Seymour, and he said, 'I never want a girl in a video again. I'd rather go out with a dolphin.' Which is why I put dolphins all over the video. I've been asked by students about the metaphorical imagery in those videos, and I'm like, 'Fuck if I know.'