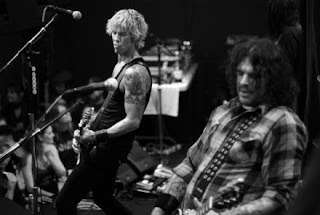 Seattle native Duff McKagan will make his radio host debut next week with "Radio Loaded", a one-hour show on 99.9 KISW "The Rock Of Seattle" and at KISW.com

Immediately following the broadcast, the show and bonus material will be available for streaming and download at www.KISW.com

"I've always had a lot of fun as a guest on the air at KISW," said McKagan. "We figured it was about time they completely turned the reins over to me for an hour." (Ultimate Guitar)

In related news, Duff talked to Reuters' Dean Goodman about possibly writing a memoir of his life on the road.

Dean Goodman: Have you thought about writing a memoir like Slash did?

Duff: "I've been approached recently by different publishing houses to write a book ... If I wrote a book, '90 through '93, it's a grey area in my memory. It would open up something like, 'Here I sit in my living room. I just hit my 45th year. I remember my dad was 45. Some might have said I wouldn't have made it to this age. I've got kids underfoot.' And maybe flashback to 1994, when I was in the emergency room when my pancreas blew up. But it would have to be funny."

Dean Goodman: There's nothing funnier than an exploded pancreas.

And in a longer, more in-depth interview with Steve Rosen of Ultimate Guitar, Duff talked about everything from his newest band Loaded, to the old days with Guns, the future of Velvet Revolver and his thoughts on Chinese Democracy.

SR: Do you keep in contact with Slash and the guys in VR?

Duff: Oh, sure, sure. Yeah, yeah, yeah. We haven’t made our best record yet. We wrote a bunch of new material last summer, and it’s far and above our best material. I think because we were back in that place, up again the wall. That’s when we perform the best. So we’re actively looking for a singer. The guy has got to be not just good, but great and have greatness. That will happen when it’s meant to happen. I’m not sweating it, but we haven’t made our best record yet. We all know we have to do that.

SR: Have you heard Chinese Democracy? Do you have any comments on it?

Duff: I heard it. Axl’s voice sounds great. The rest of it, people have asked me, “Is it weird for you to have a Guns N’ Roses come out?” It’s not that at all. Maybe if I would have gotten kicked out of the band and then this record came out, then I probably would have felt hurt. But you’ve got to remember, I left in 1995. I left because the thing that we created in ’85 was over, and it had been over probably since 1989. We were just kind of chasing out tails trying to get that back. It wasn’t meant to be. So for this record to come out now some 21 years after we made Appetite, for it to have any sort of effect like “Oh shit,” it’s not like. It’s been Axl's thing, and it always has. That will never change. As far as the band or the songs, they’re completely unfamiliar to me. There are some good songs that I really like, and there are some songs that I don’t. That could be any record we’re talking about.

SR: I’m really glad to see that you’re not a casualty of rock and that some guys are able to pull back from the edge to lead a good life.

Duff: I really appreciate you saying that.