Where the Hell is Axl Rose (10 Years Later) 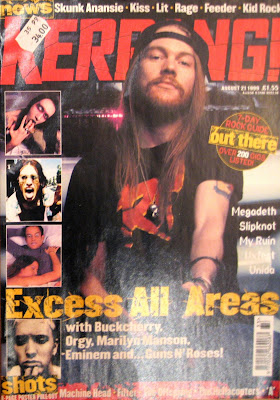 Last month, a quarter of a million people gathered in a field in Upstate New York to witness Woodstock '99, a celebration of the 30th anniversary of the legendary hippy festival.

The lineup was astonishing: Metallica, Korn, The Offspring, Red Hot Chili Peppers and Rage Against the Machine were just a handful of the bands who played.

However, one band were noticeable by their absence.

In April, it was rumoured that Guns N' Roses were to be making their long-awaited comeback at the festival. After an absence of six years, it was suggested that GN'R were returning to preview songs from their equally anticipated new album.

And then, in typical Guns fashion, the whole thing fell through.

The rise and fall of Guns N' Roses is one of the most intriguing tales in the history of music. For six years during the late '80s and early '90s, they were the biggest band on the planet. To many, frontman Axl Rose was Guns N' Roses - a flame-haired wild card as enigmatic as he was unpredictable. It was partly his antics that led GN'R to be crowned "The Most Dangerous Band in the World."

And then they disappeared.

Or rather, Axl did.

While his bandmates were spotted out and about in LA or touring with their respective side-projects, Rose retreated to the solitude of his Malibu mansion. Once the most recognizable rock star on the planet, such was the effectiveness of his vanishing act that only one picture of him has been seen in the past six years. 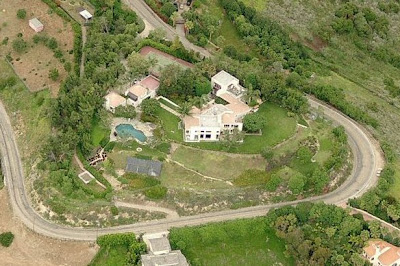 Latigo Canyon road, a long and winding stretch of grey tarmac that runs through the barren, fire-scorched Malibu hills, leads to the home of Axl Rose. Although it is possible to walk up the road, the huge security gates that stand in front of the singer’s residence make it clear that visitors are not welcome.

According to insiders, Axl rarely emerges from his house, and when he does it's only to buy sundries at the beach-side shopping malls in the presence of his matronly housekeeper.

Over the past six years, Rose’s public appearances have been few and far between. In April 1996, he turned up backstage at a Red Hot Chili Peppers concert at the LA forum. "He'd cut his hair short and grown a beard", recalled Chili's drummer Chad Smith. "I didn’t recognize him."

Such was his anonymity that when Rose attended a Radiohead show he had to undergo a thorough body search by the venue's doorman. Three months later, in March 1998, he was spotted on the balcony of the Hollywood Palladium, watching Tool.

Sightings by members of the public are more common, though not always as reliable. In December 1997, Axl was reportedly seen at the Universal Film Studios in Los Angeles with a child and a Hispanic woman. Another sighting placed him buying popcorn at a cinema in Century City, Los Angeles, while further sources claim to have seen him as far afield as New York, apparently sporting black or brown hair that looked suspiciously like a wig.

Indeed, the only public sighting that can be properly verified occurred in February 1998, when he was arrested in Phoenix, Arizona, for disorderly conduct at the local airport.

Rose's trial took place exactly one year later. He didn't attend the hearing, and was fined $500 in his absence. A police photo taken at the time of his arrest shows him with short hair and Five o'clock shadow. This is the last picture anyone outside of the Guns camp has seen of him. 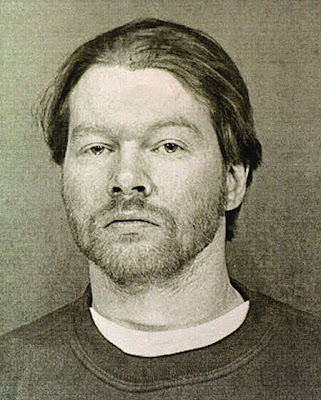 Details on new GN'R material are equally vague. Those working on the album have been sworn to secrecy about its contents and the working methods surrounding it. What we do know is this: Sometime between 1993 and 1997, Axl jettisoned virtually all of the other members of Guns N' Roses. Guitarist Gilby Clarke was the first to go ("the cheques just stopped", he claimed afterwards. "I took that as a hint."), followed by Slash, Duff McKagan and drummer Matt Sorum.

Between 1994 and 1998 these various lineups rehearsed at LA recording studio The Complex, where they would work 10 hour shifts running from 9PM to 7AM.

By April 1998, the lineup had finally settled down and the band were said to be making their first tentative steps towards actually recording a new album. As well as Axl and long-standing keyboard player Dizzy Reed, GN'R also featured guitarists Paul Huge (a buddy of Axl's from Indiana who played on the Gunners' last recording, their cover of "Sympathy for the Devil" for the Interview with the Vampire soundtrack, and the man largely blamed for Slash's departure), and former Nine Inch Nails man Robin Finck, ex-Replacements bassist Tommy Stinson and Vandals drummer Josh Freese. Production duties were being handled by Marilyn Manson / Pantera associate Sean Beavan, after Axl had approached Appetite for Destruction producer Mike Clink, Killing Joke bassist Youth and techno guru Moby.

Over the next 12 months, the band apparently recorded 30 songs for the album, continually reworking them. Tracks recorded were said to include "Prostitute," "Cock-a-Roach Soup," "This I Love," "Suckerpunched," "No Love Remains," "Friend or Foe," "Zip It," "Something Always," "Hearts Get Killed" and "Closing in on You." Depending on who you believe, they veered from techno-industrial rock to old-style Guns sleaze.

Matt Sorum revealed Axl's love of samples and loops; contrarily, Chris Vrenna stated: "I have a feeling it's gonna be more like Appetite, than anyone is expecting."

When the Sex Pistols were rehearsing for their 1996 reunion tour, Pistols main-man John Lydon claimed to have heard "some folky nonsense" emanating from the next room, only to discover it was actually Axl and Co., hard at work. Basketball-player-turned-rapper Shaquille O'Neal supposedly appears on one track, after befriending Axl while recording in the same studio.

Interestingly, sources even suggested that the album already had a title - possibly Cockroach Soup or, more realistically, 2000 Intentions.

August 1999, and there is still no sign of a new Guns N' Roses album. The band's record company, the Polygram / Universal group, say that they have tentatively scheduled its release for the end of this year, although sources admit that it has been on the schedules several times before and the band have consistently failed to meet deadlines.

Speculation has mounted that Rose has forced the band to re-record the entire album three times, and that the process has already cost more than a million dollars. One certainty is that Robin Finck has left the band and returned to Nine Inch Nails. The guitarist had signed a contract to join GN'R for two years; when it expired earlier this month, he had done nothing other than record guitar parts that have yet to see the light of day.

However, earlier this month, the rumour mill sprang into action once more regarding a "new" GN'R song. 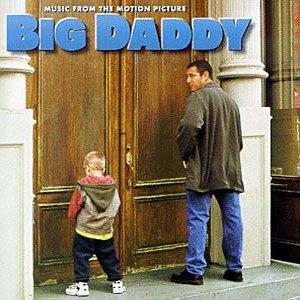 The closing credits of the Adam Sandler movie Big Daddy features Guns' classic "Sweet Child O' Mine." Halfway through, it segues into what appears to be a completely different version of the same song with Axl’s original vocals over the top. The most common theory is that the latter was recorded by the most recent lineup, although no one seems to be able to confirm or deny that fact. Moby has added further fuel to the fire, claiming that there is a completed version of the album and suggesting that Axl should simply release it immediately, regardless of circumstances.

Whether that happens or not is in the hands of Axl Rose. Hidden away in his Latigo Canyon retreat, he’s fully aware of the pressure to deliver something truly spectacular - something that will return GN'R to their position as the biggest band on the planet. The last six years have offered only rumour, gossip and hearsay, both about the band and Axl himself. Some of it is feasible, some is downright ludicrous. But separating truth from fiction is only one part of the puzzle. The big question is: what will Axl Rose do next? And at the moment, there’s only one man who can answer that ... 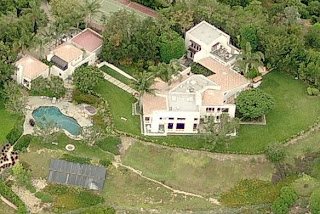 Axl is so FINE! Has he done any modeling over the past 15 years? Why doesn't he capitalize on his awesome looks to get publicity? Hot Damn.

for me, being reclusive only makes axl look more interesting. I think we all had enough of artists that keep popping up, just because their publicists tell them to.

This is the way axl finds his way to cope with the world. Sad or just being true to himself? Axl has always been this amazing paradox.

Loved to see that cover, though.
ard

and, off-topic: this edition of kerrang would be a wonderful 23rd anniversary, had i only known axl would be on the cover that day. :)

:)
That makes two of us.
I'm glad to have mellowed with age.

AXL, where are you? We all miss you! We all get older but still need to see each other. Love, Suzie