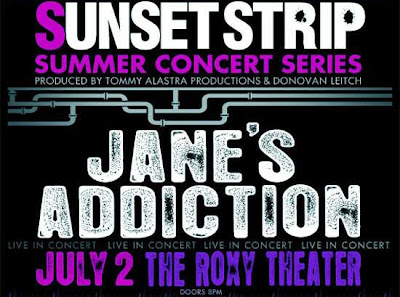 "We in Jane's Addiction have done several intimate LA shows over the past year or so... Little places with 100 or so tickets set aside for the fans. It was tough for a lot of fans to get in even after waiting all day for entry. With all of our friends and family in LA, it's sometimes hard to accommodate everybody. Well it looks like we are doing another show and we have decided to make this show an event that is mainly for the fans. We are going to strip back the guest list, inviting only our immediate loved ones and let the majority of tickets be made available to the people who have given us so much over the years, the fans."

This, only days after the band announced it's returned to the studio with its new lineup, which places former Guns N' Roses member Duff McKagan on bass. Rich Costey (Muse, Franz Ferdinand) will be producing the as yet untitled new album, which is due out in 2011 (via LA Weekly).

In other news, Digital Spy is reporting that the new Manic Street Preachers album, Postcards From A Young Man, features Duff McKagan on one track - "A Billion Balconies Facing The Sun."

Three other tracks are said to feature a gospel choir, while the band's Nicky Wire quipped "back of the net" when told that the title track sounded like Queen.

Frontman James Dean Bradfield said, "we're going for big radio hits on this one. It isn't a follow-up to Journal For Plague Lovers, it's one last shot at mass communication."

Wire added, "we've always been about infiltrating the mainstream. It was a conscious decision this time to want to hear ourselves on the radio. Our mantra at the start was, 'if you've got something to say, say it to as many people as possible.'"

A potential lead single is titled "It's Not War Just The End Of Love" and Wire claimed, "I believe in the tactile nature of Rock 'n' Roll. There's a generation missing out on what music meant to us.
posted 5:59 AM