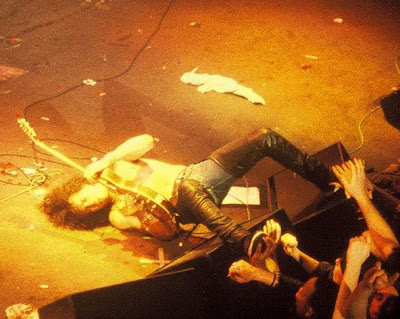 Bruce Springsteen, in the liner notes of his Essential Series compilation wrote: “In any body of work there are obvious high points. The rest depends on who’s doing the listening. Where you were, when it was, who you were with when a particular song or album cut the deepest.”

When I read this as a young teen after purchasing the CD, I wondered how it hadn’t hit me before: the great albums, the ones that stand the test of time, aren’t just those that are objectively “classic.” They’re the ones that connect with us. The ones that came into our lives at a certain time and take us back to that place again when we listen to them; the ones that remind us of a mood or an emotional experience or a relationship that is long gone. Everyone has his or her own life’s soundtrack.

I was fourteen years old when I heard a Guns N’ Roses song for the first time. This was just before the dawn of high-speed Internet and YouTube, when downloading video files was a matter of leaving the connection active overnight and tying up the phone line (much to the irritation of one’s parents). So there was some effort that had to be made, and thus an appreciation for the final product, which perhaps eludes some in the broadband era.

I had decided to check out one of the band’s videos after hearing a song I liked on my older sister’s laptop. “Sweet Child O’ Mine” was the first that popped up when I searched, and when it finally finished downloading, I initially found humor in the video’s dated approach: the ‘80s MTV logo, the leather pants, the frizzy hair and generally amusing fashion styles. This was not quite what I expected after hearing “Patience,” whose laidback acoustics had been appealing.

But not even midway through, I was unexpectedly struck by something I couldn’t quite place. There was something real and raw about the music, and goddamn, that guy could hit the high notes, and shit, who was this guy in the top hat going wild on guitar?

Indeed, one of the largest misconceptions that has pervaded over the years is that Appetite for Destruction is a “hair metal” album. That the band arose during the era of Motley Crue, Ratt and Poison is not incidental – they started out playing the grimy clubs of the Sunset Strip alongside those very groups – but the album was a decidedly more self-loathing creature. Crue sang about girls, girls, girls and partying all day; GN’R partook in such debauchery but didn’t seem to enjoy it much, whether evidenced by the pining for home in “Paradise City” or the general excoriation of the hedonistic lifestyle that permeates the entire album.

And while it’s easy today to criticize Axl Rose, the sole survivor of the original lineup, it seems he and Izzy Stradlin might have been the only ones who really understood that element of the music. Rose’s lyrics were at once angry, spiteful, misogynistic, confused, lonely, tender and heartfelt. Steven Adler happily pounded away at his drumset with a big grin on his face, but did he even really understand that “Welcome to the Jungle” was the anti-L.A. anthem? That “Paradise City” is about wanting to escape the sleaze of the big city and return home to “where the grass is green and the girls are pretty”? (That he ended up on “Celebrity Rehab” with Dr. Drew speaks for itself.)

This, of course, is not an attempt to undermine the contributions of the other bandmates, nor a mockery of Adler’s addictions. That’s what made this band so great, after all: its chemistry. Each member contributed something integral and unique to the recording process, and that one-in-a-million combination resulted in a masterpiece. When the lineup became fragmented, and when the egos began to run out of control, the balance was upset and that all began to change. But for a moment in time, Guns N’ Roses was that rarity: a near-perfect union of musicians whose talents created a near-perfect work of art.

Some will roll their eyes at the words “Guns N’ Roses” and “art” existing in the same sentence. These are probably the sort of people who judge a book by its cover – or, in this case, an album on its image. It’s easy to laugh at the hair-sprayed Rose, clad in leather and makeup, as he struts around onstage for the music video to “Welcome to the Jungle.” But it says something that by their next album proper the band had already killed off glam and helped usher in the alternative rock image (Rose often in torn jeans or shorts, Slash in plaid t-shirts).

Every song here is very good, 11 of the 12 tracks great, and 10 of the 12 nearly flawless. The worst song is “Anything Goes” – a modified carry-over from Rose’s previous band, Hollywood Rose – which is the emptiest song on the album, a sleazy portrait of dirty sex, but even here you can sense a kind of spite and vileness to the delivery of the lyrics: if Crue had sung this it would have sounded celebratory, but instead, you get the feeling that Axl’s just going through the motions and sick of it – utterly disgusted by sex. (A theme that would pop up repeatedly throughout his career as a musician.)

“Think About You” is the other track that isn’t quite great enough to stand out amongst the rest of playlist, but it is admittedly overlooked by many fans. The live performances over the years have particularly highlighted the song’s strengths, some of which, for whatever reason, aren’t immediately apparent during the studio cut. The chorus grows more infectious with time.

Everything else is fantastic. “Welcome to the Jungle,” “Sweet Child” and “Paradise City” need no introduction – you’ve heard them at just about any sports event you’ve been to, and we all know how fantastic the lead guitar solos are – but the lyrics and more subtle interplay between Slash and Izzy Stradlin are far too often ignored. Slash, an accomplished blues-rock-based guitarist, had far more in common with the boozy sleaze-riffs of Keith Richards, Joe Perry and Angus Young than Mick Mars or whoever the dude from Winger was; Stradlin, then, was his perfect counterpart, a man who knew his way around a guitar neck and had the musical chops that so many other rhythm guitarists sorely lack.

And, as aforementioned, these ostensible party songs are anything but; coming back to Springsteen again, it’s analogous to how “Born in the USA” was used as Reagan’s campaign theme. That song criticized the Vietnam War but was chosen merely for its anthemic chorus; similarly, GN’R was savagely attacking the Los Angeles lifestyle through their music while being rotated on the city’s most popular radio stations.

And that, perhaps, is why this record tends to connect with so many teenage males. (It still sells over 2,000 copies per week.) Sure, a lot of the content here is misogynistic and confused and hypocritical, but that’s part of the appeal, in a way: it’s a painfully honest album. The anger – some of it pointed, some of it aimless – and frustration and passion and naivety sums up the male experience. “It’s So Easy” is the sound of your balls dropping, while “Sweet Child O’ Mine” is your first tumultuous love. (As is now an E! True Hollywood Story staple, the song was written about Axl’s then-girlfriend, Erin Everly, the daughter of Don. Their relationship, by almost all accounts, was far from ideal; but the song captured the high points of a sour relationship in a way that a track such as “Love the Way You Lie” can only attempt to convey.)

The album concludes with one of the best closers in rock n’ roll history, “Rocket Queen.” The first half of the song in itself is great – but it’s after the (literally) orgasmic solo that the pace completely changes, as if it has transformed into an entirely different song altogether. In a way, it channels the experience of angry sex – aggressive and rough until the climax, then the come-down.

The outro features some of the most desperate and honest lyrics of Rose’s career. After bragging about his “tongue like a razor” and sexual experience, he basically tells the object of his affection that if she sticks with him, even though he’ll screw her up and leave her strung out, he’ll never leave her side. She’s probably not buying it, though, because he’s forced to plead: “Don’t ever leave me / Say you’ll always be there / All I ever wanted was for you to know that I care.” The lyric itself isn’t particularly deep or awe-inspiring on paper, but the earnestness and desperation in its delivery is something no artist could ever replicate on a cover version.

Rose and his crew of misfits might not have fully realized what they were creating in 1987, but Appetite for Destruction is one of the best and most emotionally forthright albums ever recorded. The title, accurate as it is, doesn’t refer to physical violence – as is still the case with Axl Rose today, the songs all come down to the emotional experience. Listening to Appetite today still brings me back to when these tracks cut the deepest: as a teenager, filled with all that typical hormonal rage and confusion, angry for no reason — and with no clue just how much this record would still mean to me a decade later.

Great blog, I just stumbled upon it and I love it! I'm an 18 year old female who heard GNR for the first time a few months ago. I can't imagine my life without them. You hit the nail right on the head with all of this. They are the most raw, gritty, genuinely badass band I have ever heard. I never get tired of listening to them. I love hearing other people rave about this band! My parents don't like them, haha, and I don't think they like me liking them, but whatever. This band moves me more than any band I've ever heard before.