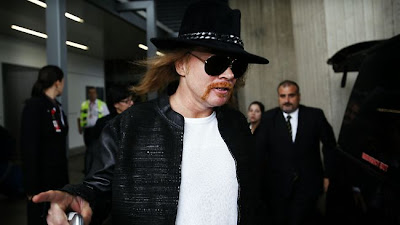 During a brief hearing before Los Angeles Superior Court Judge Rita Miller, the lawyers for Rose and Irving Azoff said they plan to meet with the mediator, a retired judge, on April 25. Trial is scheduled the next day.

Azoff sued Rose in March 2010, claiming the musician owes his company, Front Line Management, more than $1.8 million and broke a verbal agreement to pay the company a 15 percent commission for performances by the band in Taipei, Seoul, Japan, Canada and South America.

Rose countersued last May 17, claiming the manager tried to force him to reunite with the original Guns N' Roses band members and failed to properly promote the band's Chinese Democracy CD.

The countersuit refers to the US Justice Department's recent antitrust lawsuit that sought to stop Ticketmaster and Live Nation from merging over concerns the new entity would have too much control over artists and venues.

Afterwards, Ticketmaster entered into a consent decree with government regulators that allowed the merger to go forward under certain operating provisions.

Court papers submitted on behalf of Azoff state that Rose has refused to take part in the settlement talks and has not given his lawyers permission to make commitments on his behalf.

However, Rose's lawyer, Sasha Frid, denied the musician is the stumbling block in resolving the case.