Slash: "Nothing Is Going To Happen With VR For At Least A Couple Of Years" 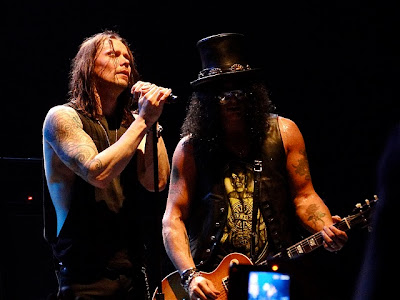 Slash was interviewed by Vorterix while on tour in Argentina. He says this regarding Velvet Revolver's future:

So ya know with Velvet Revolver, it's like Duffs got his own thing, I've got my thing, Matt's got his thing. If a great singer comes and says I want to sing for Velvet Revolver and we all go yeah, we'll make a Velvet record. But I can do my own thing - I don't have to go back and do that. Unless it's good enough to do it, you know what I mean.

So next year I definitely will make another Slash record with Myles Kennedy - and go on tour. So at least for the next couple of years nothing is going to be happening with Velvet Revolver - that I can see because I'll be focused on this. And after that's over if something happens - I'm not really concerning myself with it right now. We had all these different guys try out, all really good singers - but nobody has fit the thing so, ya know, I have to move on.

[Regarding Corey Taylor] Because of the social networking, the way information gets out so quickly now. We did work with Corey Taylor, as soon as that rumor, next thing you know everybody is saying Corey's the new singer. All we were doing was just rehearsing with him, trying him out - auditioning him so to speak. So in order to do that, our process is we take a lot of music we wrote and we give it to him, and he writes his lyrics and he comes in and we just perform it and record it. It's just an audition process. So he did come in and do all that. But I just wasn't - it just didn't seem to fit right to me. And he's great and I love Corey, but it didn't seem like the answer the Velvet Revolver problem.

Thanks to FunkyMonkey at HTGTH
posted 8:05 PM

The thing is he wants Axl and i dont think thats gonna happen jejeje.cheers.