Duff McKagan Performs "It's So Easy" with Avenged Sevenfold 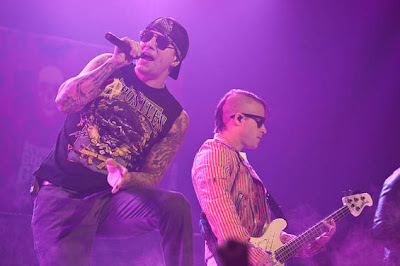 via Blabbermouth
Video footage of Duff McKagan performing the Guns N' Roses classic "It's So Easy" with Avenged Sevenfold at the third annual Revolver Golden Gods Awards, which took place this past Wednesday night (April 20) at Club Nokia in downtown Los Angeles, California, can be viewed below.

In a 2006 interview, MTV News asked Avenged Sevenfold singer M. Shadows if Guns N' Roses was his band's biggest influence. "GN'R is my favorite band of all time," he said. "It's funny 'cause we just did a thing for the [Los Angeles Times] and the guy's like, 'People compare 'em to GN'R and Shadows walked out with a GN'R shirt,' and he thought that was weird that I would, but the thing is, I'm not ashamed of the bands I love. I love that band. You can compare us all you want they're a huge reason why I'm even in a band and even write music. My dad gave me Appetite for Destruction when it first came out; he saw [GN'R] on Headbangers Ball, and they're a huge inspiration. Metallica and Megadeth and GN'R, those are bands that I'll never deny loving … those are bands that kind of made me and made this band kind of what it is. We don't try to be like, 'Oh, we're becoming a big band, so we're gonna pretend like we don't have any influences.'"