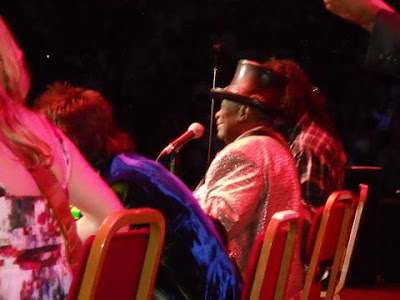 Ronnie Wood, Derek Trucks, Susan Tedeschi and Mick Hucknall were also there for the all-star jam that was shot for a DVD. 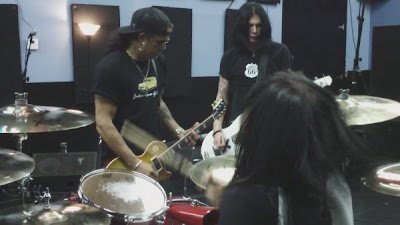 Haley Joel Osment has signed on as "Victor" for Slash's film, Wake the Dead

"Starlight" single to be released on July 25

Production on the new album will start-up again in September 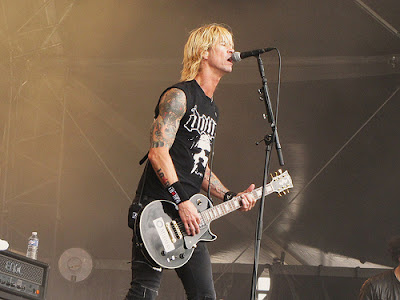 Axl Rose Caves In to Irving Azoff and Lets Him Win 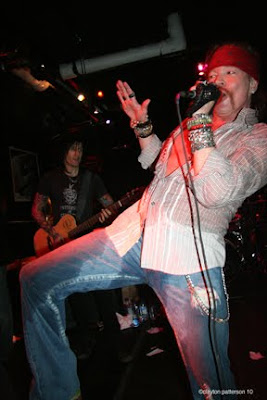 "They were settled to the mutual satisfaction of the parties," said attorney Howard King on behalf of the singer's ex-manager, Irving Azoff.

The resolutions were announced on the day Los Angeles Superior Court Judge Rita Miller had scheduled trial of the two cases between the rocker and Azoff.

No terms were divulged. But after a preliminary accord was reached, lawyers for Rose filed papers stating that the final accord would involve "a comprehensive touring agreement in which Guns N' Roses would perform at various...venues."

Azoff sued the 49-year-old singer in March 2010, claiming Rose owed his ex-manager's company, Front Line Management, more than $1.8 million and broke a verbal agreement to pay the firm a 15 percent commission for performances by the band in Taipei, Seoul, Japan, Canada and South America. 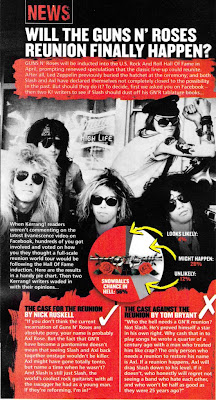 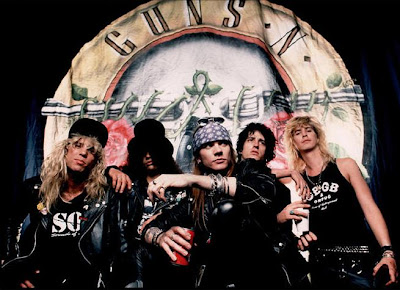 May 1993 - Izzy Stradlin reunites with Guns N' Roses for five shows in Europe and the Middle East to fill in for his replacement, Gilby Clarke, who broke his wrist in a motorcycle accident

September 26, 1993 - Duff plays the first show on his solo tour at Webster Hall in New York City. Slash joins Duff onstage and they perform "It's So Easy" together.

December 1994 - The Rolling Stones classic "Sympathy for the Devil" is released as a single. It appears on the Interview with a Vampire soundtrack. Lineup: Axl Rose, Slash, Duff McKagan, Matt Sorum, Dizzy Reed and Paul Huge.

March 10, 1995 - Duff and Matt play at the opening of the Hard Rock Hotel in Las Vegas. They're in the house band with Teddy Andreadis called Wayne Neutron. Izzy Stradlin also performed songs with the band.

January 24, 1999 - Duff, Matt and Slash play at the Slamdance Film Festival in Park City, Utah. They perform "Attitude,", "Knockin' on Heaven's Door" as well as other songs. The media calls this "a GN'R reunion."

April 2000 - Izzy Stradlin plays four shows in Japan with Duff on bass in support of Ride On.

June 22, 2000 - Axl joins Gilby Clarke and the rest of The Starfuckers onstage at the Cat Club on Sunset Boulevard. They perform "Wild Horses" and "Dead Flowers."

May 22, 2001 - Izzy Stradlin's River is released with Duff McKagan featured on bass and acoustic guitar.

April 29, 2002 - Slash, Duff and Matt play together with Buckcherry singer Josh Todd and guitarist Keith Nelson at the Randy Castillo Tribute in Los Angeles. They are joined by Cypress Hill's Sen Dog on "Paradise City" and Steven Tyler on "Mama Kin."

Setlist: It's So Easy, God Save The Queen, Nice Boys, Lit Up, Paradise City, Mama Kin.

August 21, 2002 - Izzy Stradlin's On Down the Road is released, the album features Duff McKagan on bass.

Late 2002 - Izzy Stradlin temporarily joins his former Guns N' Roses band mates Duff McKagan, Slash, and Matt Sorum in an early version of Velvet Revolver. Izzy contributes to the songwriting process while the band is in its formative stage. Some of these songs end up on Velvet Revolver's Contraband, and Izzy Stradlin's album Like a Dog.

January 21, 2003 - Duff, Matt and Slash play at the Sundance Film Festival in Park City, Utah. They perform (among others) the songs "I Wanna Be Your Dog," "Sympathy for the Devil," "New Rose," "It's So Easy" and "Paradise City."

May 13, 2003 - Scott Weiland confirms to Rolling Stone that he is the singer for the band featuring Duff, Matt and Slash. He also says that the band's name is Reloaded.

The exclusive invitation-only show was preceded by a media Q&A session.

September 5, 2004 - Izzy Stradlin joins Velvet Revolver on stage in Bologna, Italy. They play "It's So Easy" and "Paradise City."

May 17, 2006 - Izzy Stradlin joins Axl's New Guns N' Roses at their fourth and final sold out show at New York City's Hammerstein Ballroom. It's the first time since May 1993 that Axl and Izzy shared a stage together. Izzy plays on "Think About You," "Patience" and "Nightrain."

June 11, 2006 - Guns N' Roses headlines Sunday night at the 2006 edition of the Download Festival at Donington Park, UK. Izzy Stradlin joins the band on stage for several numbers for the first time on the European Summer tour.

December 17, 2006 - Izzy makes his first guest appearance on the North American tour at the show in Universal City, CA at the Gibson Amphitheatre at Universal CityWalk.

December 20, 2006 - Izzy Stradlin makes his third guest appearance on this leg of the tour in Universal City, CA at the Gibson Amphitheatre. In all, Izzy plays a total of 17 shows with the Guns N' Roses in 2006.

Nov 22, 2009 - The LAYN Rocks Benefit. Slash and Friends are joined by Duff McKagan and Steven Adler (along with Dave Navarro and Chester Bennington) for "Paradise City."

June 11, 2011 - In an interview with Rock AAA.com, Duff McKagan reveals that he hopes to tour the UK and South America with Izzy Stradlin in late-2011.

August 09, 2011 - Slash announces via Twitter and Facebook that he will be playing the "Road Recovery" benefit on September 13, 2011 --the 20 year anniversary of the Use Your Illusion records -- along with Duff McKagan, Matt Sorum, Gilby Clarke, Wayne Kramer (of the MC5) and special guests, at the Best Buy Theater in New York, NY.

October 30, 2011 - Axl Rose gives a 1-hour television interview to VH1 Classic's "That Metal Show." Axl tells host Eddie Trunk that Duff McKagan's Loaded will open some shows for Guns N' Roses. In this latest interview, Axl seems to have softened his stance on the Rock N Roll Hall of Fame induction, saying "We'll see how it plays out if we're inducted. If that happens, we'll see what lineup of the band they like and what members they want and don't want. I don't know much about it. Inducting Elton John back in 1994 was a big thrill for me."

December 16, 2011 - At the Key Arena in Seattle, Duff McKagan hopped on stage to perform "You Could Be Mine" with his former band and its current lineup.

December 16, 2011 - Matt Sorum, Steven Adler and Gilby Clarke all sit-in with Camp Freddy at the Roxy on the Sunset Strip in LA. Steven Adler, Matt Sorum and Sebastian Bach play together for "Sweet Child O' Mine."

December 17, 2011 - Duff McKagan joined the latest version of GN'R on stage again at Pacific Coliseum in Vancouver, British Columbia, Canada to perform 2 GN'R classics, "You Could Be Mine" and "Civil War."

Duff and Izzy Might Tour the UK and South America ... 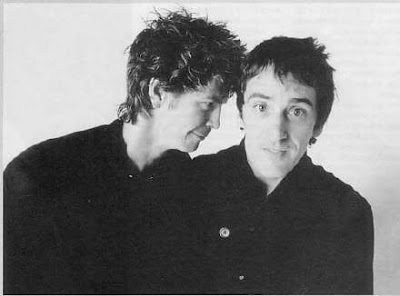 Duff McKagan has exclusively revealed that he plans to join forces with his former Guns N' Roses band mate Izzy Stradlin for a global tour later this year.

The ex-GNR and Velvet Revolver bassist told RockAAA that he hopes to hit the road with his current band Loaded with Stradlin in support for a tour which will include stops on both sides of the Atlantic.

McKagan said, "It would be, it will be, really fun to go to South American and the UK with Loaded and Izzy to do a tour together.

He and I have talked about it and it'd be great. At the end we'd do some songs together like 'Dust N' Bones' and 'Pretty Tied Up' or whatever.

It would be really cool."

You can watch the interview below. 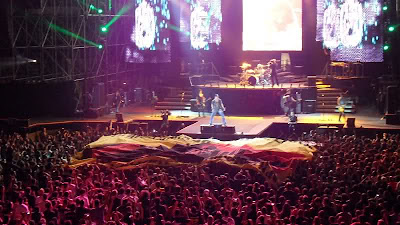 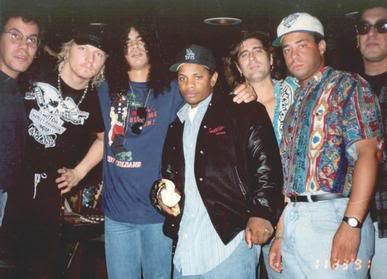 REVOLVER: You have been sober since 1994. Why did you write a song called "Cocaine" now?

DUFF McKAGAN: It's just this tongue-in-cheek song about me in 1993 when I quit cocaine. Of course my alcohol intake went up. Everyone would be like, "Dude!" and I'd be like, "Well, at least I quit cocaine." So that song is about my state of mind: "Empty bottle of Vicodin, the dirty clothes I slept in ... I hid a gun in a darkened place, a simple short arm's length away." I was paranoid.

Yeah, man. I had guns everywhere.

Ever get shot? No, I was just paranoid. It was the '80s in L.A. We hung out in the seedier underbelly. Then add drugs to that, and hanging out with the N.W.A. guys, Ice-T, and stuff like that. There were always guys around ready to protect my house and stuff. And it fed into my paranoia. They were like, "Fuck ... are you strapped? "I'm like, "Uh?" They're like, "Well, we can hook you up." And I started buying guns.

Did you hang out with N.W.A. often?

Yeah, all the guys. They were, like, the other band like Guns N' Roses in L.A., to be quite honest. They were telling the same story we were telling, and we both recognized that. We were fans of each other's bands. Were we the tightest budddies, hanging out? No. But we had parties and stuff together and hung out.

Speaking of that time in your life, you played with Guns N' Roses in London last year. What did it mean to you personally?

That's what it meant: It was a personal thing. And what happened personally between Axl shall remain personal and private. And if we had never played a show, it might have been a little better.

What do you mean?

Well, 'cause now everybody knows about it. People ask me now. I've known the guy since 1984. We became men at the same time. We witnessed this really fucking weird thing that happened to us. It was amazing and beautiful, but dark and fucked up, but we were the only ones in the fishbowl. So there are certain things I can't share with my wife or people who are really close to me, 'cause they just weren't there. They weren't part of the band. So there's going to be that, which bonds us forever. In London I was like, "I'm gonna go see my friend." And that's it.