Slash & Conspirators are a BETTER Live Band Than NuGnR 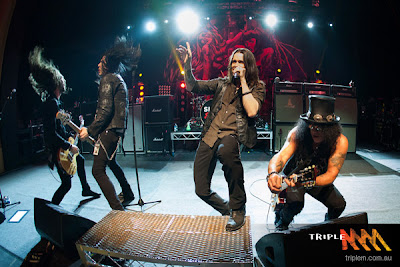 "Slash has the best live rock band on the planet"

New Year’s Eve in Las Vegas. A Tuesday night in Adelaide. After just three songs, they are neck-and-neck.

This reviewer did not set out to compare the Slash show at Thebarton Theatre last night to Guns N' Roses all-bells-and-whistles outing at the Hard Rock Hotel and Casino which rang in my 2012.

That had probably been my personal gig of the year to date, with Axl Rose’s wailing version of AC/DC’s “Riff Raff” a spine-tingling highlight, and this was ... well ... a Tuesday night in Adelaide.

But given the pulsating, compelling, crushing delivery of “Halo,” “Nightrain” and “Ghost,” the comparison had quickly grown unavoidable. Slash’s new album may be a little too modern rock for these ears but this is already a visceral, life-affirming spectacle.

By the time “Standing In The Sun,” “Back From Cali” and “Mr Bownstone” flash by as songs four, five and six respectively, it’s official:

Tuesday night in Adelaide is actually BETTER than New Years in Las Vegas.

Myles Kennedy, replete with understated dark buttoned shirt and chain wallet, is as close to perfect as any vocalist you could hope to be. He doesn’t try to imitate Axl or any of the other singers he is “covering” tonight – but makes every single tune (aside from the two sung by vocalist Todd Kerns) his own.

Slash is like a footballer who has become a tennis player. Before, you could only glance at him occasionally – now he is the centre of attention despite uttering barely a word into the microphone all night.

And he stands up to the scrutiny. To say his is a God-like presence as he grimaces, smiles and plays classic riff after classic riff is the suggest you expected anything else – and I didn’t.

Here is what does surprise, delight and entrance:

Slash has decided to stick with a band – The Conspirators – rather than continue down the purely solo path. As I said, the recorded result of this is not quite to this writer’s taste.

But live, the punkish aesthetic of Appetite for Destruction, born out of squalid camaraderie, has been gloriously resurrected. Axl once once said an early 2000s incarnation of GnR could “play the shit” out of the early songs. Well the Conspirators can play the #!#% out of them – with all the subtlety of a rhinoceros on Viagra.

“Rocket Queen,” “Nightrain,” “Mr Brownstone”, these guitar-driven anthems from 1987 get their most anarchic, authentic renditions from this band. The current GnR, on the other hand, leans heavily in style and feel towards the over-blown but magnificent Use Your Illusion albums – into which Slash did not delve at all last night.

Pauses between songs while pianos and the like are wheeled out – and the number of slower tunes – suck the momentum away from current GnR.

It’s only the Blues Jam and “Godfather Theme” which do that to Slash’s gritty set.

Ultimately, Slash gets out of the DeLorean from scummy 1988 where this was the size of venue Guns were playing. Axl is from still from 1992, when they were in stadia. That’s the difference.

Current GnR are not cabaret – but compared to Slash featuring Myles Kennedy and the Conspirators, they are.

Both bands, morally, could convincingly call themselves “Guns N’ Roses”. Both finish with “Paradise City”, shooting confetti into the stalls. But the Conspirators can’t afford to give away a mic every night when their singer throws it as far as he can.

When Velvet Revolver’s “Slither” ends the main set and the same band’s “Fall To Pieces” starts the short encore, something else is glaringly apparent.

The idea of reassembling VR with a new singer to replace Scott Weiland is patently ridiculous. Slash already has the best live rock band on the planet right now.