"I'm not the one who created this war."

USA Today Exclusive Interview with Axl Rose: "I had to deal with so many other things that don't ha... bit.ly/V7g4PP #GunsNRoses 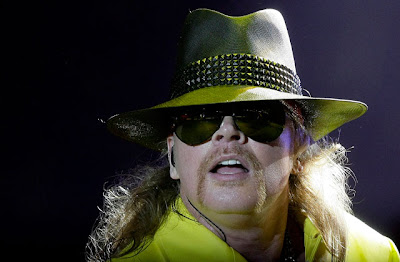 This November, GN'R will play their first-ever Las Vegas residency.

For the 12 shows, spread-out over a 25-day period, and titled ironically enough, Appetite for Democracy, Axl Rose has promised to play a "special set-list" comprised of songs from the brand's multi-platinum debut, Appetite for Destruction, and their much-maligned, 2008 offering, Chinese Democracy.

The Joint at Hard Rock Hotel and Casino has been pulling-out all the stops promoting these shows -- GN'R branded elevators, airport shuttles and poker chips -- Axl Rose is even making a (very) rare television appearance on the Jimmy Kimmel show a week before his Vegas stay.

What has led Axl Rose to set-up camp in Vegas?

Is this a last-ditch attempt to get his brand back in the black after 10+ years of mis-steps, no-shows, and disappointments? Was Axl's refusal to participate in Guns N' Roses' induction to the The Rock and Roll Hall of Fame the behavior of a bitter has-been, or was the "last true rock star" simply keeping it real?

If you haven't been following Guns N' Roses closely since they ruled on MTV, here's the short version: Axl Rose is the sole-remaining member of the once-great band that included Slash, Izzy Stradlin, Duff McKagan and Steven Adler.

Following the departure of his band-mates in the early to mid-1990s, Axl has toured intermittently under the Guns N' Roses banner with a rotating line-up of session musicians.

Even the (somewhat) interesting personalities -- Buckethead, Robin Finck, Paul Tobias, Josh Freese and Bryan "Brain" Mantia -- who worked on Chinese Democracy have abandoned Axl and his touring cash-grab/nostalgia/karaoke act, leaving him with a bland group of faceless mercenaries who cover 2 different decades/versions of GN'R over the course of a single, drawn-out evening.

The truth is: Axl hasn't really done anything new in over 10 years. The new show that he debuted in Vegas on 01-01-01 leaned heavily on Appetite and Chinese, just like the special set-list these residency shows promise. In fact, that's all he's really been doing since 2001. Touring Appetite and Chinese.

Is this residency finally going to be Axl's last gasp? Or will he continue to circle the drain as long as songs like "Sweet Child" and "Paradise City" put asses in seats?

Although, they occupy prominent positions on Axl's payroll, he considers them family -- his mother and his little brother respectively.

Their latest schemes for Axl include selling V.I.P. "meet-and-greet" packages (which Axl does not attend), and the auctioning-off of their old clothes dryer(!), and other used equipment. They are even charging gullible fans to visit their official website.

For years, Axl posed as the guardian of the Guns N' Roses name. The narrative was that Rose was a true artist who was protecting the band's songs from exploitation. Really, Axl was just too scared and too uninspired to release anything new. Now that his housekeeper and her son are managing the brand, crass commercialism is suddenly job #1. I expect Team Brasil to lower the franchise's value even more before they metaphorically "torch the joint and walk away."
posted 11:58 AM 11 comments: