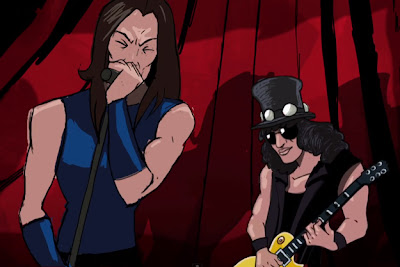 via Loudwire
Slash is once again delving into the animated world, but this time with a more sinister turn in the video for "Bad Rain."

The Riff Lord & his co-Conspirators turn up as the house band at a strip club that holds a dark secret.

In the video, an older gentleman enters the club and is immediately transfixed by the fetching redhead with the snake tattoo dancing upon the stage while Slash featuring Myles Kennedy and the Conspirators play in the background. The woman has seemingly every man in the place glued to her every move, but the latest arrival is the one garnering most of her attention. As she continues to mesmerize the gentleman in the front row, he starts to notice that the people around him are not what they seem. But we won’t give any more of the video away. Watch for yourself below.

This isn’t the first time Slash has been involved with animation, as Velvet Revolver‘s "Dirty Little Thing" clip had animated elements. The rocker also appeared in animated form for Disney’s Phineas and Ferb film.

In other Slash news, the guitarist and his band will perform on TBS’ Conan on October 4. The guitarist has been a longtime supporter of the late night host, famously donning a "I’m With Coco" pin while performing on Jay Leno’s late night show.

Watch Slash featuring Myles Kennedy and The Conspirators and other great gigs on Moshcam.