Twenty years ago today, while "Patience" was climbing the charts and Axl Rose was defending his use of the words "faggots" and "niggers," a group of students in Tiananmen Square made their mark on World History ... 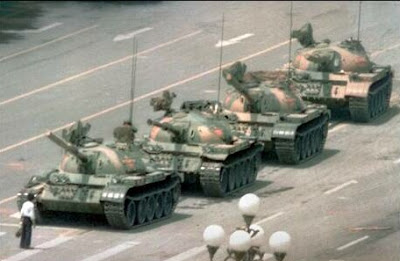 I was supposed to be speaking at a training session here in Beijing on Thursday, but it was postponed at the last minute. The foreign participants could not get visas. Look at the date, I was advised. June 4.

A Beijing acquaintance said she was posting an entry on her (distinctly non-political) blog when up popped a warning that the post contained prohibited material. She pored over the text trying to find the offending words. Finally she noticed a name similar to “Wang Dan,” an organizer of the 1989 Chinese democracy movement. She deleted the name and her post sailed through.

If I had a renminbi for every delayed visa, cancelled conference and blocked Web site that has been attributed to official jitters over the 20th anniversary of June 4, I could buy one of those cool new electric cars China is about to unleash on the world.

This is a great country, no doubt about it. A certified economic superstar with $2 trillion in U.S. Treasury bonds, a shrewdly successful anti-recession stimulus package and most of the shelf space at Wal-Mart. Also an emerging military power with plans for blue-water aircraft carriers.

Chinese firms have their sights on Hummer, the Cleveland Cavaliers, Volvo, Saab, Aquascutum and other brand names the sinking West must pawn. Chinese artists are keeping the global auction market afloat. Chinese universities are turning out more engineers, social scientists and, yes, journalists than just about anybody else’s. China is the center of the action, and I feel privileged to be part of it.

But 20 years after Chinese tanks crushed the democracy movement at Tiananmen, the uncounted souls who lost their lives that night have attained an improbable victory: One of the greatest nations on earth is scared to death of them. The security precautions are visible and, often, risible. Dissidents are rounded up. Business visas are denied. Twitter, Flickr, Bing and other Web sites are suddenly blocked.

I can no longer watch funny video clips on YouTube. Worst of all, I am prohibited from seeing photos of my Brooklyn-based grandson because the blog his dad set up for him is evidently considered a Tiananmen-related threat to national security. I love China, but this is personal.

Sometimes I want to take the entire State Council by the lapels of their increasingly stylish suits and shake some sense into them. Gentlemen, this is not the way a great power behaves. Afraid of its own shadow. Frightened of its own people. Haunted by an event that took place 20 years ago, one you can’t even blog about without risking your Internet access or your day job.

Some Chinese take those risks. Though June 4 has been effectively effaced from textbooks and media coverage — and though many young people have only a vague idea what happened — you do hear the phrase “liu si” (6/4) now and then. At a recent wine-tasting, a young Chinese banker told me he is convinced that liu si organizers will ultimately be exonerated. The official English-language Global Times the other day printed an approving reference to the 1989 movement as “an era of enlightenment on democracy for intellectuals.” So far, more than 8,000 scholars have signed the Charter 08 document calling for, in effect, adoption of the movement’s democratic goals. A few of the petition’s organizers are under house arrest, but mere signers seem to have escaped sanction.

Indeed, foreigners who move to China are struck, as I am, by the wealth of personal freedom on display. Not just the latitude to shop, move to another city or attend wine tastings, but also to debate such poisonous subjects as Tibet, corruption and the shoddy construction of schools flattened during last year’s Sichuan earthquake.

Chinese newspapers have discovered investigative reporting, and some of the results actually get published. Chinese Web sites are ablaze with disputation on subjects mundane and controversial alike.

In recent months Netizens, as these Web vigilantes are known, are responsible for hectoring authorities into investigating a suspicious prison death in Yunnan Province and for reducing charges against a masseuse who stabbed to death a Hubei official when he allegedly tried to rape her. It’s not democracy, but it is a better, more responsive, more humane system than the one China had 20 years ago. To my Chinese friends, it is unthinkable that the country could regress to those benighted days.

So I part company with romantics who say Tiananmen was a noble failure. China may be decades from Westminister-style democracy, and the Communist Party would sooner jump off the top of the new Shanghai World Financial Center (world’s tallest building, by some measures) than give up its monopoly on power. But you need only observe the absurd lengths to which official China is going to un-celebrate this anniversary — and suppress all mention of its genesis — to grasp the real verdict of history: The pro-democracy demonstrators may have lost the battle of June 4, but they have won the war for China’s future.