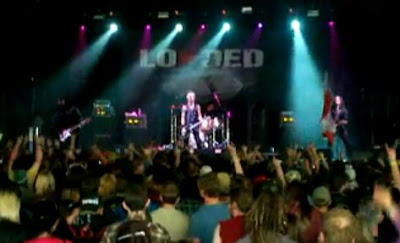 Duff McKagan's Loaded played Download 2009 over the weekend, and I have just a few videos to share, but first, the news.

Duff told Contact Music that he expects their new singer to "land in their laps."

He said, "either you've got the guy or you've not and we've worked with some really talented guys. The trick is getting the chemistry right. Slash is making his solo record, which he's desperately needed to do for years, so I'll keep working with my other band Loaded, he'll do that and music will happen when it's supposed to happen. The right guy will fall into our laps when he is supposed to and maybe that's why it hasn't happened yet."

In a separate interview with Noisecreep, Duff says, "anybody that spends too much on a record these days, that's fool's money spent. Nobody sells records like we did in the '90s or '80s. It's not the business model anymore. People get their music for free off the Internet."

"We signed with a small, indie label which was really cool. There's not a lot of pressure like you get from a major. Major labels are becoming a thing of the past."

"The great thing about this band is that we just don't give a fuck. We'll play anyplace, and it's refreshing. It is kind of rewarding when you become the buzz of a town when someone sees you and finds you are playing. We sell records at the gigs. Who knows? By July this could be an underground summer record."