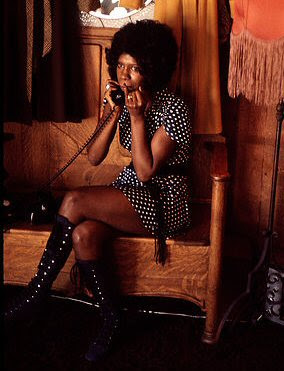 Slash's mother, Ola Hudson, passed away unexpectedly on June 5 after a battle with lung cancer. She was a professional costume designer named who designed clothing for acts such as John Lennon, Diana Ross, Ringo Starr, Flip Wilson, Helen Reddy, Linda Ronstadt, James Taylor and the Pointer Sisters. She was best known for designing David Bowie's Man Who Fell to Earth wardrobe.

On behalf of myself and Guns N' Roses fans worldwide, I wish to extend deep and heartfelt sympathy to Slash and his family in this difficult time.
posted 1:27 PM

My girlfriend and were sorry to find out that Ola, Slash's mother, had passed away not long ago. We think he is a great guitarist, and were very impressed with Ola's designs for David Bowie.

OLA HUDSON was my Wonderful Friend and I love her very much! She was an incredible person & designer, She designed a Beautiful & Expensive gown for MISS SANTA MONICA to wear to compete in The Miss California USA Pageant and always provided me with Fabulous gowns to wear to The Awards Shows (Rip) OLA!
Ann Dandridge POWERFUL PEOPLE and FRIENDS