Ron: "I Would Love to Get Out There and Play" 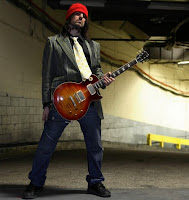 Nightwatcher's House of Rock
Interview and text by Nightwatcher © 2009

NHOR : Any plans yet for touring that you're aware of?

RT : Right now nothing is confirmed. Nothing is definite. If pieces fall into place, it could happen. That's the most political way I can say I know nothing. (Laughs) In other words, it could happen, I hope it happens, maybe it'll happen, I'd like for it to happen. I know a lot of other people who would like for it to happen, and if everything works out it will happen. But there are a lot of variables involved, down to every little thing to making sure that all the pieces are in place so that we can do this the right way.

RT : Thank you. I'm getting good at this. I think I'm going to run for mayor soon. I've had years of practice now. (Laughs)

NHOR : Now that 'Chinese Democracy' has been released, are you relieved that at last you don't have to continually answer the question, "When is the album coming out?"

RT : No, because now everyone's saying, "When's the next album coming out?" (Laughs)

NHOR : So... when's the next Guns album coming out?

RT : There ya go. I think it was about two days before people starting coming up and asking me, "So, when's the next album coming out?" Man, give us a chance. (Laughs)

NHOR : Are you satisfied with your performances on 'Chinese Democracy', or are there some that you wish you could go back and change?

RT : I'm as satisfied as I'm capable of being. Because no matter what I do, within a week I'm hearing all the things that I'd want to do differently. What I'd want to add, change the tone, or replay. That's always how it is. Because with any album, the mixing process is never done. It continues for years after the album's out, it's just happening in your head. And the stuff that's in your head, you can't do anything about it. You're haunted by it. So within a week of anything I do, whether it's my album or 'Chinese Democracy', I start getting haunted by little things. Like, how I bent that note, man I should've got more of a squeal out of it. Or, shit, I should've put a harmony on this. I could've had a better melody for that. Whatever it is. So I am as happy as I'm capable of being.

RT : I think I felt hungry. I was on my way to dinner. (Laughs) It was cool. The first time I heard it there was a feeling of relief. Not just for myself, but there were so many GNR fans who were waiting for so long for music to be legitimately released. It was a feeling of being happy for them, that they finally got that, after such a long wait and sticking it out, that something was finally out there. I was pretty damn happy.

NHOR : The album recently was certified platinum here in the United States. Amongst the Guns camp, is there satisfaction in how the album has sold thus far?

RT : It's hard to say. I think it's pretty much a given, with pretty much any musician, no matter how much it sells, you're going to want to sell more. Those are the driving forces that keep musicians going. The constant striving to do more, do better, to up it even more. That's just something which is inherent in every musician's nature. So I never really asked them. I never said, "Hey Axl, are you happy with this shit?" (Laughs) We don't talk about that stuff. We talk about stupid movies, crack jokes and stuff like that.

But I could only assume that most people feel like I do. I would love to do more videos, and just shove it down the world's throat even more. I would love to get out there and play for every person that has ears and do whatever we can. Because you know, when you put out an album, it's like having a baby. You want to raise that baby for the most life that it can have. You want to do what you can for it. So it's that kind of thing. What can I do to give this baby a better life? That's pretty much how it is. So no matter how well it's doing you always want more for it. It's the paternal instinct.

NHOR : What is the one thing that people would be surprised to know about Axl?

NHOR : A lot of people have this conception of the new Guns N' Roses just being Axl and the rest of you being hired hands, which I'm sure you're aware of. How much of a band is this configuration?

Considering there are guys in the band who have been there 18 years to whatever amount of time it is, and considering that we see each other on a daily basis, and when we're not, we're speaking to each other all the time, hanging out and doing things together, jamming and playing on each other's albums, and doing everything band members do... I'd say it's pretty much a band. Whether people want to acknowledge that or not, that's up to them, and whatever floats their boat. It doesn't change the truth.

You can read the full article here.
posted 10:35 AM

Make sure you read the full article over at Nightwatcher's - I left a lot of stuff out.

A clarification from Ron himself:

"That interview where I said I was unsure about a tour was from months ago - it doesn't mean that this is the current state of things. And I NEVER announce GNR bizz, not for me to do, I don't do it."