Duff: "Why Are We Rehearsing at 3 in the Morning?" 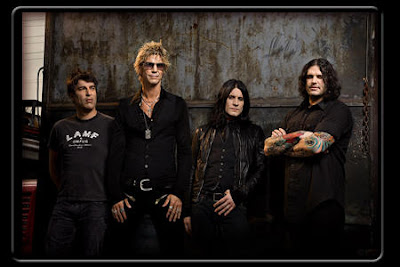 On the corner of a big Los Angeles intersection stands an office block you could pass a thousand times and not take in. At ground level, there are a few shops, a couple of places to eat and the ubiquitous Starbucks. Nothing the tiniest bit special.

It's here (armed with a skinny cappuccino) that I meet someone totally out of place in the mundane surroundings - Duff McKagan, American hard-rock institution.

Taking in the fortysomething with short, spiky blond hair and aviator shades, you know he couldn't be anything but a rock'n'roller.

Founder member and bassist of Guns N' Roses, he's now bassist in Velvet Revolver (with his GN'R mates Slash and Matt Sorum) and frontman of his own group Loaded.

Tonight, he brings Loaded and songs from the band's riotous new album Sick to Download 2009 at Donington Park, on the same bill as a much anticipated performance from the reformed Faith No More. But, as we take a table outside Starbucks in the early LA summer sunshine, this pencil-thin, sober, super-fit character tells me he's "just happy to be alive".

He experienced it all - the women, the drugs, the extreme highs, the devastating lows and, most of all, the booze. 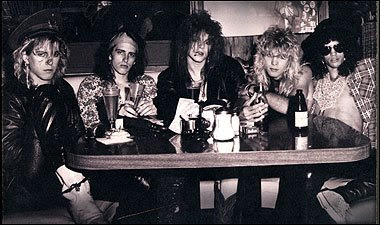 "If I wrote about what happened to me in 1994, it would have to be called All The Shit I Don't Remember," he explains.

That was the year he contracted acute alcohol-induced pancreatitis (his pancreas swelled to the size of a football) and he was told to give up booze or die.

"And I wanted to die because it hurt so bad and there was no escape. I was pleading with the doctors to kill me."

"If I drank, I would have died. It was very black and white," he continues. "When I got sober, I really started to get in touch. I took up martial arts. My sensei told me to look at myself in the mirror every day and say, 'Yesterday, I did everything right that I could do'. I'm proud of that."

It was at this point Duff began to realise he wanted out of Guns N' Roses, which, with Axl Rose at its helm, had become the biggest band in the world.

"I met my wife Susan and she got pregnant. And as I was about to have this kid, I started thinking , 'Shit, there's only me and Axl left (of the original members).'

"Why are we rehearsing at three in the morning? I don't want to do it anymore. I got a life.

"I was kind of hoping the band would get back together. I was under a lot of pressure but I was looking like the level-headed guy.

"Our manager was calling me every day for advice. What a scared little prick. I'm going, 'Dude, manage the fucking band. You're the manager!' I started to look around and go, 'What a bunch of morons'."

It's sad to reflect on the disintegration of a band who made some of the finest rock albums since Led Zeppelin - Appetite For Destruction, Use Your Illusion I and II.

Duff remembers the band's humble beginnings in LA. "Five guys who started in this town. We were living in squalor with nothing but a united belief in what rock'n'roll was,

"And we brought enough different shit and we trusted each others' opinions and we liked each others' influences. We toughed it out. We didn't care. Then not just America but the whole world were like, 'Yeah, we relate to this whole thing'."

All these years later, I ask Duff what he thinks of Chinese Democracy, the Guns N' Roses album that took an excruciating 15 years to make with only Axl of the original line-up present.

It's a question he gets asked a lot. "Number one, what does it matter what I think of it?" he replies. "But for the record, Axl sings great on it. There are some songs I really like and some I don't.

This brings us on to the subject of Velvet Revolver, formed in 2002 as a kind of hard-rock supergroup made up of ex-G N'R members, Dave Kushner from Wasted Youth and, until he left, Stone Temple Pilots' singer Scott Weiland. 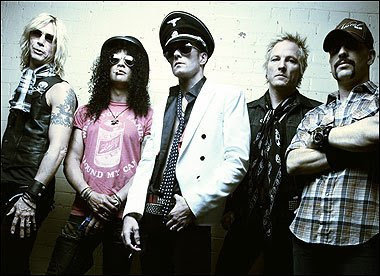 For Duff, the lead-up to Scott's departure in April 2008 was a particularly harrowing time.

As someone who's been sober "apart from a couple of stumbles" since 1994, he was watching the singer going "over to the other side".

"Our last month and a half of touring with him was brutal," says Duff. "I guess maybe it's not fully known that Slash, Matt, Dave and I decided that we were going to get rid of him.

"We tried to bring him back but we couldn't do it. His old demons popped back up. Look, I'm a drug addict, I totally get it but he was too far gone. None of us had the energy to go through that.

"So we actually fired him on April Fools Day after the gig in Amsterdam. I wish him the best of luck."

Now VR are on enforced hiatus as they look for a new singer. "We've written all the music for the next album and the songs are huge," says Duff. "Scott was an amazing frontman, one of the best on the planet, but I think we still have our best record to come.

"But until Velvet Revolver find a singer, I'm putting 110% of my energy into Loaded. The new record was really fun and really inspired."

You can see elements of Duff's other bands in Sick but there's a clear nod to his youth and his love of punk rock - "the 13-year-old kid who saw the Clash in Seattle in 1979".

This is Loaded's third album, arriving a full eight years since Dark Days, and finds Duff swapping bass for lead vocals and guitar.

One song kind of sums up Duff's life less ordinary - Slide. It goes, "The Seventies gave us punk rock/The Eighties gave us crap/Nineties junky chic so cool, I don't remember much of that".

Then he turns to me and smiles: "Well fuck, I survived all that shit and I'm here feeling really great about it."

of course it matters what duff thinks of Chinese Democracy. I bet some of those songs Axl recorded were originated back then (i believe This I love is an example).
And i think it's duff at his best when he's being honest: axl's voice is still doing wonders, some stuff is brilliant (Madagascar, Shackler's Revenge, IRS, There was a time) and some stuff are just average (This i love; if the world; rhiad and the bedouins). I'm a fan and I can have an even point of view, why shouldn't Duff?!

As for the reasons to have left Gn'Roses after Slash dit it...baby was just another reason. Duff: you always recorded during dawn, man...axl never functions before 10 PM (he gave interviews about it).