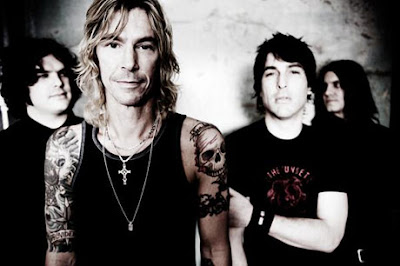 via Blabbermouth
Duff McKagan's Loaded has parted ways with Century Media Records after releasing one EP (2008's Wasted Heart) and one full-length album (2009's Sick) through the label.

According to the group, "We have been writing new material and it is going fantastic. We have a shitload of songs demoed and now we are just looking for a lovely place for these songs to call home!"

"The addition of Isaac Carpenter on drums has taken us to some amazing places and we can't wait for you all to hear them... soon!"

Duff McKagan's Loaded's next live performance will take place on February 26 at the D&R Theatre in Aberdeen, Washington.

Sick sold around 1,400 copies in the United States in its first week of release. The CD landed at position No. 43 on the Top New Artist Albums (Heatseekers) chart, which lists the best-selling albums by new and developing artists, defined as those who have never appeared in the Top 100 of The Billboard 200.

Sick was released in North America on April 7,2009 via Century Media Records. An e-card for the CD, which was produced by Martin Feveyear is available at this location.

Loaded released Live Episode (1999) and Dark Days (2001), before other commitments meant Loaded were put on the back burner to some extent, although they never split up.
Duff McKagan's Loaded's five-song EP, Wasted Heart, was released in September 2008 via Century Media Records