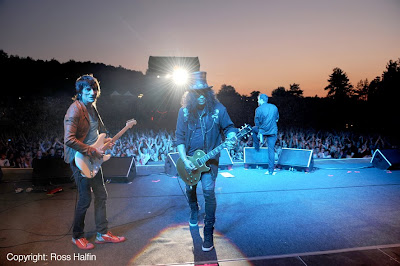 More than 38 bands will once again come together to celebrate rock at the fourth annual Rock On The Range, set for May 22 and 23 at Columbus Crew Stadium in Columbus, Ohio.

The two-day lineup for America's premiere destination rock festival includes some of the most rocking artists in music today. In addition, marking another first for Rock On The Range, Mistress Juliya of Fuse TV has signed on as the hostess and Mistress of Ceremonies for the event.

I'll be able to hear this from inside my house.

If I buy you a ticket will you be my Ace Cub Reporter?

While we know Slash will perform in Columbus in May and that Myles Kennedy will perform lead vocals on his upcoming tour, very few other details have been announced regarding Slash's tour.

During the last 24 hours, we've exchanged messages with Slash and learned more about what comes next and what can be expected live. First, for the big news. When asked about the songs Slash will perform on his upcoming tour, he wrote Slash Fans United the following: "There will be GNR, VR, Snakepit songs on the tour. Plus some tunes from the new record. Also, some Alter Bridge & Myles Kennedy solo stuff."

As for when we can expect to learn more about Slash's other bandmates: "Very soon, I need to have some rehearsals with the guys I'm thinking about using." Slash previously informed us Chris Chaney -- the bassist on his solo album -- probably will not be able to "make it" for the tour.