Slash to Dust Off GN'R Rarities for Summer Tour 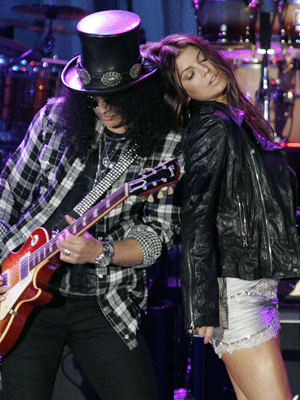 LA TIMES
Slash will be taking the album on tour with singer Myles Kennedy, who fronted post-Creed band Alter Bridge. Once rumored to replace Robert Plant in Led Zeppelin, Slash promises that fans will hear him perform numerous songs from the Guns N' Roses days. While with Snakepit, Slash regularly performed such GN'R songs as "Mr. Brownstone" and "It's So Easy," and he said his summer tour will dig deeper into the catalog.

It's not, said Slash, an attempt for him reclaim the Guns N' Roses legacy. Under the Guns N' Roses banner, Rose last year released the long-awaited Chinese Democracy through an exclusive deal with Best Buy. The album was met with tepid reviews and lukewarm sales, and it failed to spawn a hit.

"You know, I think the legacy of the original band stands on its own, and it’s sort of an enigma," Slash said. "It’s more popular now than it was when it was together. But the rest of what’s being going on, I don’t have anything to do with, so I don’t take the perspective of judging it. It’s two separate entities."

So then why now? Why return to songs he hasn't played to large audiences in 20 years?

"More than anything, it’s because Myles is such a capable singer," Slash said. "He knows those songs, and he sings them great. A lot of those songs are in a register that most people can’t sing, and Myles can, and he can do it from the heart. That’s the real reason for unwrapping certain material that I haven’t played with anybody else."
posted 5:26 PM

let's all send twitter messages to SLASHHUDSON , maybe he needs some help with the setlist

Not really surprised, but it is interesting that Slash paid for the record himself as far as recording. If you can afford it (he obviously can) it's not a bad idea as you have total control which artistically I would think would be awesome. I am interested to see how it turns out for him and if he recoups his investment or not.