Ozzy Talks About His Contribution to Slash's Album 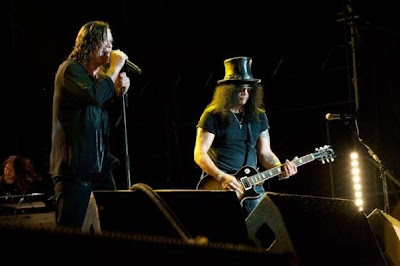 via Blabbermouth
Although Ozzy Osbourne has been hard at work on his own new solo album for much of the past year, the Prince of Darkness did find time to contribute vocals to a song on the upcoming debut solo effort from guitarist Slash.

Ozzy told The Pulse of Radio how the collaboration came about. "Slash is a real good friend," he said. "He's a lovely, lovely man and his family's great as well. And he phoned me up and he says, 'I'm doing an album, would you be prepared to do — sing on it?' So he sent the tape over and I put a vocal on it and did some lyrics. It was kind of like an '80s vibe and I thought, 'He ain't gonna like this.' He loves it."

Although the track was initially slated to be the first single from Slash's record, due to legal issues The Pulse of Radio hears that a song featuring Avenged Sevenfold's M. Shadows on vocals, titled "Nothing To Say", may now be the first one headed to rock radio stations.
posted 11:39 AM

I said it once, and will say it again:

a) slash and the epic "how to find a singer"

b) axl and the epic "if you can't find 2 guitarists like Izzy and Slash, pay 3 to play with you".

In 2010 I say i find the list of people a mix of both interesting as well as boring artists. I'm not holding my breath because I'm really fed up with different versions of "It's five o' clock somewhere" and the low general quality of VR's "Libertad". I'll quietly wait to hear the new album.

All in all: I'm happy that the guy found a way to make music and keep healthy. 1 would find ironic that josh freese plays drums in almost all tracks...what about his beloved adler?!