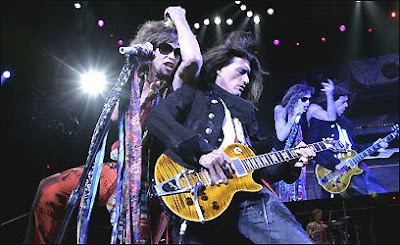 Rolling Stone
Steven Tyler’s new manager has sent a letter to Aerosmith’s management threatening legal action if the band makes good on their promise to tour with a new singer.

In the letter, manager Skip Miller asserts that Tyler is synonymous with Aerosmith: "Can you imagine the manager of the Rolling Stones calling for the replacement of Mick Jagger?" Miller writes. "Steven is Aerosmith, along with the others. He’s the guy the public knows. He’s the singer."

As Rolling Stone previously reported, prior to entering rehab for an addiction to prescription pain medicine, Tyler vowed to stay in Aerosmith, saying in a statement, "I wish to set the record straight and say that I have read reports of a rumored two-year hiatus and want to be clear that this is completely false and I will enthusiastically be writing, recording and performing with Aerosmith as soon as things are handled." Miller’s letter reiterated Tyler’s sentiment, noting, "Steven Tyler does not want lawsuits. We do not want to go in that direction. The direction we want is Aerosmith, with Steven Tyler, touring in Europe, touring Latin America, releasing a new album… This is the direction it’s all intended to go."

Tyler has made a few unexpected public appearances while in rehab, first singing at a local pub’s karaoke night and then surprising Home Depot shoppers with an impromptu performance over the hardware store’s loudspeaker system. His bandmates, meanwhile, are rumored to have asked vocalists like Billy Idol, Lenny Kravitz (who declined) and Paul Rodgers to fill in for Tyler on the road while the frontman works on "Brand Tyler."

Miller has asked for a February 9 meeting to discuss the future of Aerosmith with all five members of the Rock and Roll Hall of Fame band and asserted that their public singer search constitutes "acts and conduct to the harm and detriment of your own client, Aerosmith, and our client who is one of its members."
posted 9:57 AM