A Letter To GN'R From the Fans 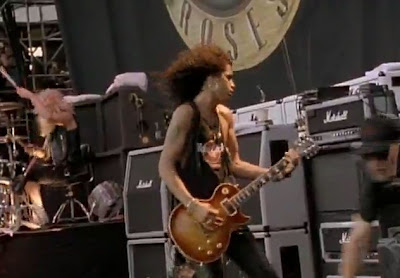 Boston Herald
Comedian Chris Gehrt is serious about getting Guns N’ Roses back together — as he should be. Ahead of the Rock and Roll Hall of Fame show April 14th, he’s trying to built momentum for a fan movement pushing the band to reunite. He’s going to fail. But I’m happy to lend him a hand.

On Saturday April 14th 2012 you will be inducted into the Rock N Roll Hall of Fame. This gave a great hope to every GN'R fan on the planet for a one time reunion show. Our one and only chance to see the original lineup on stage together again , if only for five minutes. Something we’ve been told for years would never happen. Rumors swirled, the band denied, and the fans prayed. It will always be okay because you never promised us anything.

With less than 2 weeks before the induction, the fans are watching as our reunion hopes start to disappear like Marty McFly’s family in a polaroid picture. Each day it seems like there is some new story about how there has been no communication, nobody knows what is required of them, nobody’s talking, and nobody really seems to care.

It would be easy for you to just show up, accept the induction, spend a few awkward minutes together at a podium and not talk again until somebody’s funeral. But this time we need more.

We are not trying to be selfish, God knows you have given us plenty of legendary songs, spectacular shows, and classic rock moments. You are sincerely the best rock band in the history of the world. All of your solo efforts and reincarnations of the group are awesome too. But I know even the current members of GN'R would love to see you guys on stage one more time.

Your music has inspired billions of people. Each one of you is still a fan inside. You loved Elton John, Aerosmith, Queen, Kiss, The Misfits, ELO and more. Please remember how great it feels to see your favorite band play.

We beg you to pick up the phone, grab your instruments, drag Izzy to Cleveland and play together.

You can make music history. Please do it. Give us one more memory. We deserve it.

We will continue to support you no matter what, but at the end of each concert Axl tells the crowd to “Not take [expletive] from anyone.” And that means ANYONE!

God bless you Chris. It ain’t going to happen but it’s great to see you doing the lord’s work, or maybe it’s the devils work. Either way, I’m behind you.
posted 8:06 AM

Seriously, I do get it. I get it that we all want to see those motherfuckers that have making us weep/act on them with anger.

I've been divided (aren't i always?! eheh) within this whole reunion story. On 1 hand, I want to see the fab4+adler or sorum. Of course. The thing I came to realize is that I also dread this. When Axl wouldn't tour, we all could just imagine that he was still - at least - the UYI guy. And for fuck sake: it was the greatest. When Slash wouldn't do anything besides recording absolutely forgettable and quite frankly lame songs, we all could imagine that he was just warming up for what we thought would be GN'R's 'IV-like-LedZep' album.

Bottom line is: they are not great as individuals, let's face it. Axl has nothing to do with the fired up lead singer (though i do think he's still a brilliant composer) he once was. Slash cannot put a fantastic song together without outsourcing it to Andrew Stockdale. And for god's sake: myles is just as good as some back up singers in loaded (if there were such, of course).

Watching the 'reunion' fevers, i always have the feeling they are doing it for the money. Soundgarden included. Chris and Tahyl barely speak to each other. I've recently gained respect for the waters/gilmour dispute. It's their way of staying true to what pink floyd were once.

And regretfully, the same goes to guns n' roses: it would be putting gn'r memories on the mud to force something on them. I don't want slash to talk to axl because they have to do it for the fans. Guys, we are merely witnesses of what they once were.

So, at risk of becoming the 'traitor fan': no, i don't want them to reunite, if they don't want to. And i do think it's quite funny that people look at this like it's axl vs slash. To me, the hardest guy to put himself up there is izzy.