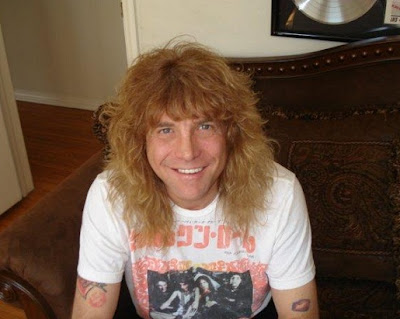 "I think he went about it the wrong way, 'cause I didn't even find out that he quit the band from him, I found out from someone else."

"Right now we're still going on with our tours. Our tour starts May 5. We have other singers that we've been talking to — even before he decided to quit, we were talking to other singers. And we wanna get more of a solid guitar player, 'cause the one that we hired for the European tour wasn't as solid as we thought."

"It's a shame that the singer we were working with decided not to work with us. Because we're going into the studio in the next three weeks, which he's gonna miss out on. And what he did to me personally I didn't appreciate. We were planning on him being in the band — that's why we did the recordings with him. So, basically, he wasted a lot of our time and a lot of our money. In fact, if he was gonna do it that way, we would have thrown him out a long time ago, we would have never used him."

"I think he's an asshole for doing it to me, or doing it to us. But God bless him all the same. . . I haven't talked to him yet. That's the kind of person I'm dealing with. I found out that he was quitting the band because somebody told me he saw it on his Facebook. I had no idea. So you can take any story you want out of that, 'cause that's how it happened."

"The next person that we work with is gonna be... obviously, he's gonna be a better singer, and a better all-around person that what we were dealing with."